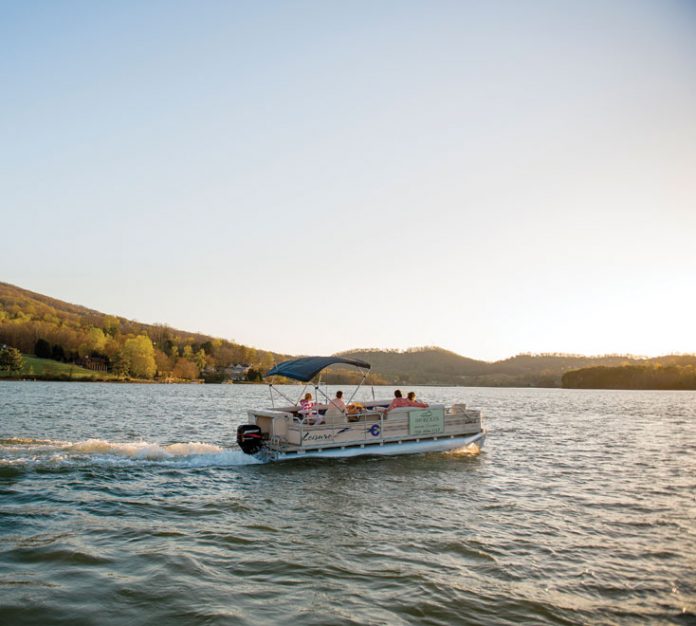 It’s easy to get lost on Lake Chatuge, but that’s sort of the point. When the Tennessee Valley Authority dammed the Hiawassee River in 1942, it splattered water everywhere into the nooks and crannies of the Blue Ridge Mountains that straddle the border between Georgia and North Carolina. To explore the 7,200-acre reservoir is to weave through secret coves, past uninhabited islands and peninsulas, all framed by the majestic peaks of the Nantahala National Forest. Although capacious enough for wakeboarding and jet skiing, scenic Chatuge invites more peaceful boating. It’s no coincidence that the local Boundary Waters marina is among JC Pontoon’s top dealers in the nation.

However, one casualty of the valley’s flooding was the Cloer family homeplace, now submerged some 2,000 feet from the shoreline. In 1987 the Cloer heirs opened a lakeside hotel on their remaining property and fortified it with a pair of cannons from a movie set (legend has it the nonfunctional props symbolize defiance of the TVA). But as Fieldstone Resort passed from owner to owner over the years, it got more shabby than chic—until a major overhaul in 2007 and rebranding as the Ridges Resort & Marina.

Georgia’s only mountain lakeside resort, the Ridges charms with amenities such as a nearby golf course, a saltwater pool, and a stone fire pit for nightly s’mores. The attached 400-slip marina makes it convenient for boaters, attracting the Antique Classic & Boat Rendezvous every year—including this year’s twenty-sixth annual event on June 8 and 9. Though the hotel is popular with groups, meeting spaces are in outbuildings, leaving the sixty-six-room lodge itself quiet and relaxed. Antler chandeliers, tapestry fabrics, and stone fireplaces create a cozy lodge ambience, if one that’s a bit heavy-handed on the pinecone motif (which shows up in botanical prints, lamp finials, shower curtain rings, you name it). The signature Oaks Restaurant serves imaginative, locally sourced regional cuisine, and this summer, a totally revamped casual restaurant, the Blue Otter, will offer waterfront dining and dockside takeout.

If you’re not out on the lake, the scenic area offers prime hiking, horseback riding, and biking. Brasstown Valley Resort, with its own championship golf course and luxury spa, is just down the road. And if you’ve got restless kids along on a rainy day, a movie theater and roller-skating rink are across the street.

But we recommend settling into one of the Adirondack chairs beneath the giant maples shading the Ridges’ patios. Look for the ducks (yes, ducks) that return to their branches every summer. You may find your own nesting instinct kicking in too.