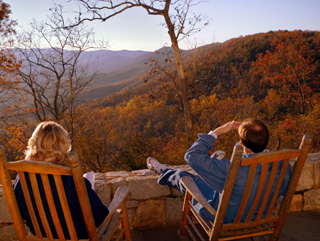 Amicalola is Cherokee for “tumbling waters,” and this 729-foot cascade is the highest waterfall (or, more accurately, series of waterfalls) east of the Mississippi. Trails descend from the top and ascend from the bottom, and some are quite challenging, involving hundreds of steps. But the best view, from a bridge spanning the falls, can be reached easily from the West Ridge Trail, a one-third-mile paved path leading from a handicap-accessible parking lot. This state park is also the access point for the 8.5-mile approach trail leading to Springer Mountain, the Southern terminus of the Appalachian Trail.

The park offers a comfortable full-service lodge, simple cottages with stone fireplaces, and campsites. The lodge’s glass walls and verandas afford spectacular views, and its Southern-style buffets keep guests fueled for hiking. A unique alternative is the adjacent Len Foote Hike Inn, a quiet, state-owned retreat accessible only via a five-mile trail.

Complete your fall fix by picking pumpkins at nearby Burt’s Farm (burtsfarm.com). And on the way home, stop by the Ellijay Georgia Apple Festival (georgiaapplefestival.org). (from $105 per night for lodge, 800-573-9656, georgiastateparks.org/amicalolafalls)

The play’s the thing. Really. Montgomery isn’t a foodie destination (for dining, go to Birmingham), and the hotels are mostly chains. But the ASF (asf.net) is the sixth-largest Shakespeare festival in the world, drawing more than 300,000 visitors annually to its sprawling campus—which NPR described as a “theater junkie’s nirvana.” The twenty-fifth season kicks off with a world premiere coproduced by Atlanta’s Alliance Theatre (through 10/3 before moving to Atlanta 10/20–11/14). Pearl Cleage’s The Nacirema Society Requests the Honor of Your Presence at a Celebration of Their First One Hundred Years stars Atlantan Jasmine Guy. The current ten-show season will reprise three bestselling shows and stage two Shakespeare productions.

Aside from the ASF, Montgomery boasts an unlikely array of museums, including the Montgomery Museum of Fine Arts (mmfa.org) and shrines to Hank Williams, Rosa Parks, and F. Scott and Zelda Fitzgerald. Nearby Capitol Hill is a stop on the state’s vaunted Robert Trent Jones Golf Trail (rtjgolf.com).

This year marks the seventy-fifth anniversary of the Blue Ridge Parkway, a 469-mile scenic byway started during FDR’s New Deal era. The most visited unit of all National Parks, the parkway doesn’t have a grand lodge like the Grand Canyon’s El Tovar or Yellowstone’s Old Faithful Inn. But it does have a nostalgic motel called the Pisgah Inn, located at a dramatic elevation of 5,000 feet, with breathtaking views from the private balconies and porches attached to every room. Its clientele are so loyal that the inn addresses daily dispatches to “Pisgahteers.”

Simple, clean facilities and a full-service restaurant make this an ideal home base for exploring the parkway by car, bicycle, or motorcycle. Well-maintained trails lead in all directions. If you hit a warm fall day, take the kids to the sixty-foot natural waterslide at Sliding Rock. Asheville, Brevard, Waynesville, Cherokee, and Flat Rock are all feasible day trips. The latter is home to Connemara, Carl Sandburg’s long-time residence and a National Historic Site (nps.gov/carl). Though written about Chicago, the poet’s words are an apt description of the Blue Ridge, where the fog also seems to come “on little cat feet.” (from $144 per night in October, 828-235-8228, pisgahinn.com)