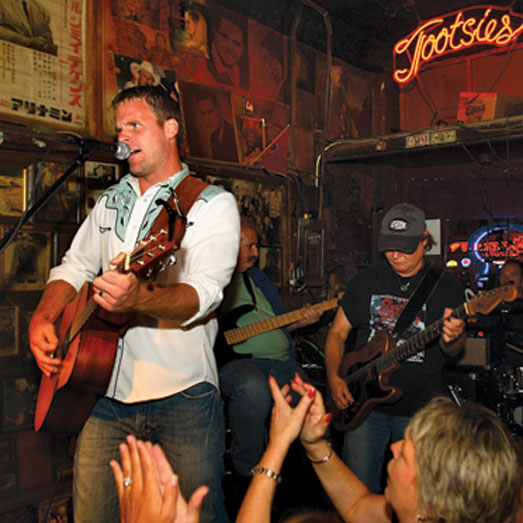 Next month, thousands of people will follow the neon lights of Nashville into the District, the downtown area that includes Riverfront Park, Lower Broadway, and Printer’s Alley. The Country Music Association Music Festival—held this year from June 10 to 13—is the city’s biggest shebang.

Arrive a day early to get your bearings at the Country Music Hall of Fame and Museum. You can’t miss it; it’s the only building in town that resembles a four-story piano keyboard. Here you’ll learn to identify subgenres of country music such as Bakersfield, Lubbock, and Nashville sounds. Afterward, take your newfound knowledge and explore Lower Broadway, where you will find some of the gritty honky-tonks that made Nashville famous. Legends Corner, Tootsies Orchid Lounge, and the Stage on Broadway each has its own vibe, but they all provide top-notch live music. Make sure to bring plenty of cash; bartenders favor quick transactions when they’re slammed, and most venues do not charge a cover, which means the band is working for tips.

STAY
The city is brimming with upscale accommodations, but none is more refined than the Hermitage Hotel, with its Italian marble entrance and Russian-walnut-paneled walls. Opened in 1910, it is one of only fifty-four hotels to receive five stars from Forbes Travel Guide. Once the terminal for Nashville’s eight railways, the Union Station Hotel conveniently lies between the District and West End neighborhoods. The lobby’s soaring vaulted ceiling, stained glass, and gold leafing hearken back to a time when travel was nothing but luxurious. If a trip to the Grand Ole Opry is in the itinerary, stay at the Gaylord Opryland. The hotel’s 2,881 rooms and 250 suites—plus dozens of restaurants and shops—surround nine acres of lush indoor gardens and waterways.

EAT
People wake up early in Nashville. By 8 a.m. the line outside the Pancake Pantry winds around the building, but the sweet potato pancakes are worth it. For lunch, try Jack’s Bar-B-Que; avoid the Broadway crowd by visiting the Talbot’s Corner location. Sample all six sauces, then order a slice of chess pie for dessert. When you’re all finished honky-tonkin’, grab a late dinner at the Paradise Park Trailer Resort in the wee hours. Inside the trailer-park-themed walls is arguably the best burger in the city. For a more genteel experience, reserve a table at 1808 Grille, where chef Charles Phillips turns out elegantly prepared, hearty dishes such as bronzed quail breast and sweet potato gnocchi.

Film premiere for a cause: “Deadline” comes to Atlantic Station