What it is: Billing itself as the most exciting two minutes in sports, the Run for the Roses is a one-and-a-quarter-mile race for three-year-old Thoroughbreds, held annually at Churchill Downs. This year marks the 140th consecutive contest. kentuckyderby.com

Why I go: “When the horses come out from underneath the grandstand and walk onto the track, everyone is standing up. Most people are standing on their chairs. I’ve seen a ninety-year-old woman stand on her chair. Then, even if you’re not from there, everyone sings ‘My Old Kentucky Home.’ You can just feel the electricity in the air, and the horses’ ears are perked straight up. They’ve never run in front of a crowd like this before and they never will again.” —Chris Riley, vice chairman at CBRE Capital Markets, and a Louisville native who hasn’t missed a Derby in some thirty years (except when his daughters were born)

Where to sit: Prime club-level seating belongs to season ticket holders, who are sometimes willing to sell their Derby spots. Public stadium seating starts at $698 for a two-day pass, which includes Friday’s Kentucky Oaks. The raucous infield ($50 general admission) is notorious, shall we say, for youthful exuberance and indiscretion.

Where to stay: Downtown has elegant options, from the historic Brown Hotel to the ultracontemporary 21c Museum Hotel.

▸ Where to eat 21c’s Proof on Main was one of Esquire’s Best New Restaurants in 2006. Pat’s Steakhouse is an old-school local favorite. Tip: Order the country ham. 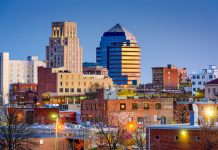