Home News & Opinion From the Magazine We made up one of these six strange suggestions to relieve Atlanta’s...

If there’s one thing Atlantans can agree on, it’s that our traffic is awful. Reasonable proposals have emerged—more bike lanes, the Atlanta BeltLine—to help relieve congestion. But local politicians also have come up with some wacky ideas for easing gridlock’s grip on the region.

Of the six public transit scenarios below, only five are actual suggestions considered by local officials. See if you can guess which one we made up. 1 Going, going, gondola
Gondolas—the kind found in ski resorts, not the canals of Venice—may someday shuttle North Fultonites over the heads of idling motorists. This year Sandy Springs mayor Rusty Paul decided to study how an aerial tram system could reduce traffic and “maybe even make transportation fun.” At only $5 million a mile, cable car systems are relatively affordable. In 2013 a Georgia Tech grad student proposed the “Atlanta Skyway” network for Little Five Points and other intown neighborhoods. “Will it work?” Paul said. “I don’t know.” 2 Sync the lights, stupid
Some contend the solution is simple: Sync the traffic lights! In 2014 Libertarian gubernatorial candidate Andrew Hunt vowed to hire a private firm that would ensure all of metro Atlanta’s lights turned from red to green in coordinated fashion. “What you need is more of a continuous system,” he said. With traffic lights working in harmony, Hunt added, Georgia could forgo transportation investment until the age of self-driving cars arrives. 3 Monorail!
Faced with Brookhaven’s increasing density, city councilman Joe Gebbia asked himself: What do we have to do to get rubber off the road? “Everyone knows monorail. Who hasn’t been to Disneyland?” he said. “It’s just common sense.” Enough sense to warrant spending $10,000 for a feasibility study on an elevated light rail line linking the local MARTA station, Buford Highway, and DeKalb Peachtree Airport. It’s costlier than gondolas—about $25 million a mile—but Gebbia believes it’s worth it. 4 Downtown Connector ad absurdum
In 2009 GOP gubernatorial candidate John Oxendine called for a “parallel” downtown Connector east of the current interstate that would create a shortcut from Gwinnett County to the Atlanta airport. What about all of the neighborhoods in the way? Not a problem, he said, as a private company could build it underground. The idea, never seriously studied, is now deader than Oxendine’s political career.

5 An NYC–style system
Suburban lawmakers who had long criticized MARTA had a change of heart this year, proposing four new rail lines by 2040 using only state funds. But road-paving lobbyists torpedoed the measure. “Atlanta will never be a world-class city without a world-class transit system,” lamented one rural pol. 6 Meet the Jetsons
If you love monorail but want some privacy, meet Personal Rapid Transit. In 2013 Fayetteville considered a proposal for solar-powered light rail featuring “podcars” that each hold up to six passengers. “You do not wait,” JPods president Bill James explained at the time. “You do not ride with strangers.” The privately funded $100 million project was to be part of a planned $3 billion regional network, but officials ultimately nixed the concept. 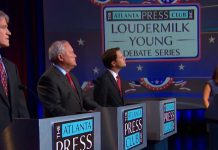 Race for Governor: Carter, Deal throw jabs in a testy debate. This round goes to Carter.