Actions have consequences, and that goes double in the world of politics. (Unless you’re former South Carolina Gov. Mark Sanford, but that’s another story.)

So it shouldn’t be too sizable a surprise to hear that a local entrepreneur and member of the Cheshire Bridge Business Association has been moved to consider challenging Atlanta Councilman Alex Wan for the District 6 race over Wan’s recent failed attempt to change the zoning rules for the area.

Unless, that is, the potential candidate in question is Michael Morrison, owner of the Inserection adult emporium and a convicted felon who once spent two-and-a-half years behind bars for tax evasion.

Judging from an interview he gave to Georgia Voice, Morrison doesn’t seem to harbor any illusions about his chances of winning a council seat. But his threatened candidacy—and the fact that the gay weekly newspaper devoted a fair amount of ink covering a bid for office by someone who concedes he “may not be electable”—speaks to the lingering divisiveness of Wan’s proposal.

Even though he might not win, Morrison made clear that he is out to see Wan lose. “Alex Wan is not our candidate,” he told Georgia Voice. “We are business owners and we have a voice, too.”

During discussions over Wan’s efforts to rid Cheshire Bridge of its strip clubs and adult-video stores, the councilman said that many of the businesses along the street supported his legislation, but felt too intimidated to speak out. By contrast, the Cheshire Bridge Business Association, a group of businesspeople and property owners—including Morrison, the owners of Nakato Japanese Restaurant and developer Scott Selig—has been vocal in its opposition; its website calls Wan’s proposal, “the most dangerous piece of legislation ever introduced to the city of Atlanta.”

Regardless of one’s tolerance for hyperbole, it appears Wan has stirred up some unwanted antagonism in an election year. We should find out before too much longer whether he becomes the next council member to attract opposition in the fall elections. 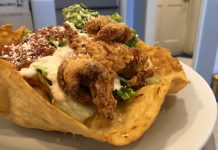