Home Eldredge ATL After a cruise with Kiss, Ledfoot Messiah is ready to bring the... 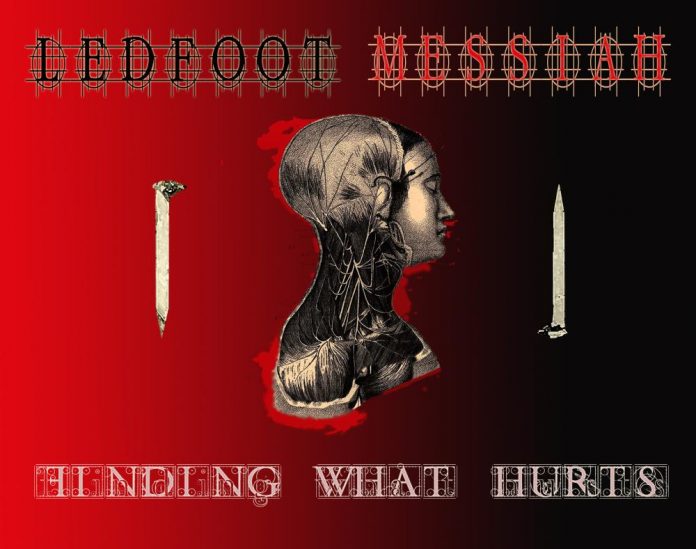 Eyeballing Ledfoot Messiah‘s 2012 itinerary, it’s easy to understand why iPhone-clad kids in burgeoning garage bands instruct Siri to refer to them as “Rock God.” This month, the Atlanta rock quintet gigged on the Kiss Kruise with the legendary act, tonight at The Highlander on Monroe Drive, the band will officially release its brand new (and make-your-ears-bleed brilliant!) album, “Finding What Hurts” and they’ll ring in 2013 with a New Year’s Eve appearance at The Clermont Lounge providing the musical backdrop for a Blondie poetry reading/beer can crushing.

But behind the scenes, the rock veterans — singer/guitarist Jeff Langston, guitarists Tommy Collins and Cotton Langston, bassist J.J. Chance and drummer/manager Mike Roberts — combine 100 years worth of experience in the music biz, a damned impressive collection of Les Pauls and Marshall stack amps and some hard-bitten life lessons that served as lyrical themes for “Hurts.” Songs on the album include tracks with titles including “Belly Up,” “Dread of Light” and “Dust of Dead Weight.”

“There’s a lot of dark subject matter in these songs for sure,” Roberts told me Thursday night. “These songs are about the darker side of life, it’s about the painful side of life and dealing with loss. We’re old [expletive]ers, too. I’m the youngest one in the band and I’m 38. So it’s a record about your life and what you’ve been doing for the past 20 years and trying to work all that out. The title track, in fact, is about a person who prefers to dwell in that darkness. It’s also about that pat on the back and saying to someone, ‘It’s going to be OK.'”

The guys in Ledfoot Messiah also absorbed some life lessons in longevity this month when they boarded the Kiss Kruise II in Miami with the make up adorned “Rock n Roll All Nite” rockers and a boatload of middle-aged Kiss Army fanboys. Recounts Roberts: “We’re talking about guys with full-on back tattoos of Gene [Simmons], Paul [Stanley], Peter [Criss] and Ace [Frehley]. We walked into the merch shop and there was one little table that had merch from the 11 other bands on the cruise and the rest of the room was nothing but Kiss merchandise. We couldn’t even begin to calculate the hundreds of thousands of dollars of merch just walking around us on the ship. There were people dressed up in Kiss make up for the entire cruise.”

While Collins and Langston enlisted in the Kiss Army at a young age, Roberts was less impressed when he stumbled onto Simmons and a flurry of fans onboard. “I came around the corner on my way to the gym and saw him with this growing number of fans all around him,” he says. “I just squeezed past them. As you might imagine,  the gym wasn’t the most popular part of the boat on a Kiss Kruise with a bunch of pasty white dudes on board. The guys in Kiss had their own suite on the top of the boat with their own pool. Unless there was a fan event, you didn’t really see them around.”

After five long years of recording, Roberts is looking forward to playing the tunes off “Finding What Hurts” live for fans tonight. “This record is a hell of a lot of fun to play live,” he explains. “People call me up to play side gigs here but there is nothing that kicks my ass like Ledfoot Messiah. That wall of sound from three guitar players and all those Marshalls just washes over you. It’s a massive attack, really.”

“Every dollar that the band has ever made has always gone back into the recording process because we’ve always been making a record for the past five years,” Roberts says. “For the first time  on Friday night, the gig money won’t be going toward the recording fund.”

So The Highlander kitchen staff can anticipate a large post-gig order of Tater Tots from the boys in  Ledfoot Messah? “No, man,” Roberts laughs. “We’re going straight for the stroganoff. The beef stroganoff at The Highlander rules.”