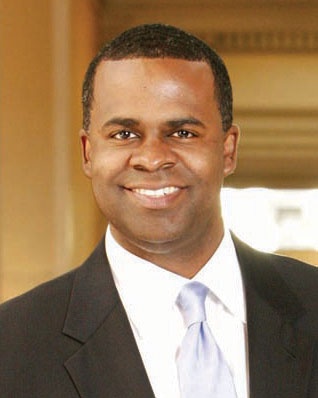 The mayor’s office is scheduled to make it official later today — Atlanta mayor Kasim Reed is engaged to Sarah-Elizabeth Langford after popping the question last week during a romantic getaway in the Bahamas. Langford is the daughter of late Atlanta city councilman and Georgia state senator Arthur Langford, Jr. who has a park named for him on Thornton Street in southwest Atlanta.

The Nassau-based Bahamas Press broke the story over the weekend after reps for the news outlet spotted the beaming couple dining at the Ocean Club’s Dune restaurant and noticed the sizable rock on Langford’s hand.

While reps for the mayor declined to answer media inquiries about the engagement until the official word is sent out later today, one source close to hizzoner was talking. “He sprang it on me as he got up out of my chair,” Reed’s barber Rick Walker told Atlanta magazine. The mayor booked a post-vacation haircut at Rick’s Barber & Beauty Sunday and kept mum about his big news until he was headed out the door. “He pulled up the pictures to show me,” Walker said. “He looked very happy. I cut his hair just before he left last week and had no idea he was going to propose. I just made sure he was looking good for his trip.”

The couple was photographed extensively when Langford accompanied Reed to the annual Mayor’s Masked Ball at the Marriott Marquis in December. Langford is a former beauty queen contestant who has competed in both the Miss America and Miss USA pageants. Fun facts: Langford donated her $25,000 win from a 2005 Miss USA edition of the NBC reality show Fear Factor to a youth mentoring charity. The 1996 graduate of Pace Academy was classmates with future Queer as Folk actor Randy Harrison.

Update: Well-wishers may want to be proactive with their wedding registry gift selections too. The engagement could be quite brief.

In statement released at noon, Reed alluded to a baby on board: “I want to announce the wonderful news that I proposed to Sarah-Elizabeth Langford over the weekend. I could not feel more blessed that she agreed to marry me, and we look forward to building a family together in the greatest city in America. I am honored to have our friends and family share this special moment with us and I ask that our privacy is respected as we celebrate this personal occasion.”