Charlie Schoen isn’t your typical 20-year-old. Beset by disabilities, he’s long been confined to a wheelchair and is able to communicate only in his own language of gestures. His parents, of course, can understand him—and so can the staff of his favorite Waffle House, at Northside Drive and I-285. When Charlie pulls on his ear, they know he’s referring to April, a waitress he befriended when he was eight. When he wipes his mouth, he’s talking about another waitress, Georgette. WaHo staffers have hosted Charlie’s birthday parties, and they came to the hospital to see him when he had surgery a few years ago. They provide Charlie the rare chance for social interaction, and it couldn’t make him happier. “That’s all he wants,” says his dad, Charles. “Hugs and love and waffles.” 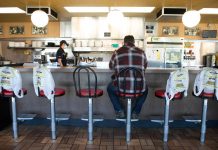