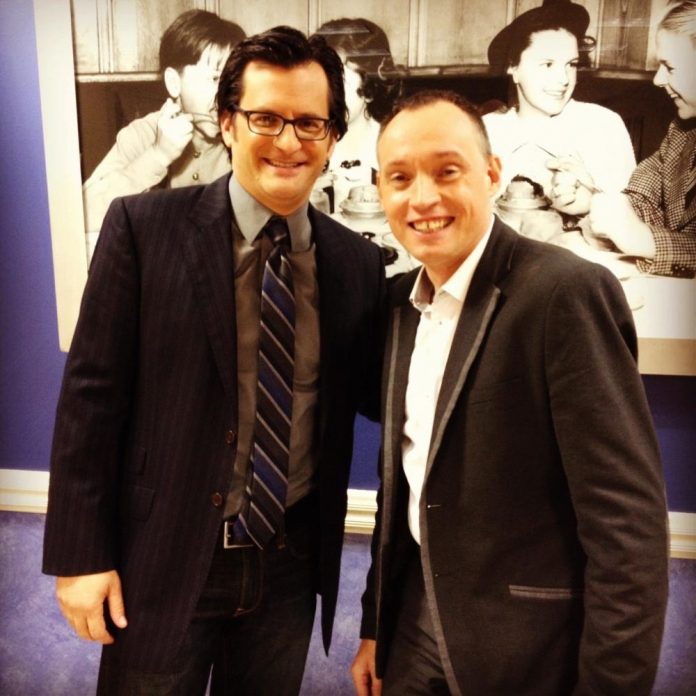 It’s not even 11 a.m. on the set of  Turner Classic Movies host Ben Mankiewicz‘s living room in Midtown Atlanta and already Lawrence Carter-Long has the movie buff, along with director Sean Cameron and the crew completely charmed. Carter-Long, the public affairs specialist for the National Council on Disability, has flown in from Washington D.C. to co-host TCM’s month-long film festival “The Projected Image: A History of Disability in Film.” Carter-Long curated the 21 films in the series and they range from 1946’s  post-World War II drama “The Best Years of Our Lives” to Jack Nicholson‘s Oscar-winning performance in 1975’s “One Flew Over the Cuckoo’s Nest” as a psychiatric patient who rebels against the institution’s dire conditions. Nattily attired in a gray formal jacket, Carter-Long is artfully making a case for tonight’s airing of “Charly,” the now-dusty 1968 drama that won Cliff Robertson an Oscar playing an intellectually disabled man who undergoes experimental (and highly questionable by today’s standards) surgery to raise his IQ.

“By programming a month’s worth of these films, TCM is recognizing the population itself, that one in five Americans has a disability in some way, shape or form,” explains Carter-Long. “It recognizes that demographic out there. These films have a lineage. Each one informs the next and they evolve and change as the times change. By putting these films into a festival like this over the course of a month, viewers can pick and choose what they want to see and perhaps place them in a new context. It might be a favorite like ‘An Affair to Remember’ but they maybe never thought about the film from the disability perspective. By grouping them together, they have a different resonance than if they were standing alone.”

For his “Projected Image” co-hosting debut, Mankiewicz clearly did his homework, poring over 2,000 pages of research and reviewing many of the films in the line up. “Re-watching these films and putting them in this context, it completely changes how you look at them,” says Mankiewicz. “The viewer has an opportunity to think about each of these films in a fresh way and that’s the exciting part of what this festival does. It’s interesting to see the progression/lack of progression as we go through the films chronologically, too.”

In 1968 when “Charly” was made, “the r-word” (read: retarded) was still being liberally tossed around to describe the title character. And while it’s cringe-worthy to contemplate in 2012, Carter-Long says that pulling the film out of its 1968 time capsule and blowing the dust off of it is important. “Showing what was happening culturally and what was happening in society is one of the most crucial things we can do with this festival,”  Carter-Long says. “Show what was happening at that time and to try and explain why it was happening and put it into context. And also, let’s discuss the evolution since and whether there’s been an evolution or not.”

The festival concludes next week with a late-night presentation of “One Flew Over the Cuckoo’s Nest” and earlier in the evening, an airing of director Tod Browning‘s still-controversial 1932 film “Freaks,” a film that first gained fame on the midnight movie circuit. “Regrettably, I was only introduced to it only after I began working at TCM,” says Mankiewicz. “I didn’t fully appreciate it. I didn’t totally believe it. I remember thinking, ‘This must be some trick photography. Bravo, Tod Browning in 1932. That guy looks like he doesn’t have any arms or legs.’ I mean, that can’t be for real, right? Basically, I was a fool.”

Explains Carter-Long: “The importance of showing ‘Freaks’ in 2012 is that it takes those conventions of who we’re supposed to identify with and where our sympathies lie and turns everything upside down. Our sympathies aren’t with the buxom blond non-disabled woman. From the beginning, your sympathies are with the freaks themselves. That’s the impact of the film. The audience is rooting for characters who look like what is traditionally the villain in a film. It challenges you to reconsider the outsider.”

“The Projected Image: A History of Disability in Film” airs each Tuesday beginning at 8 p.m. on TCM throughout October. For a complete line-up, go to TCM’s website.