Nestled in the pines of Marion County two hours south of Atlanta is an architectural oddity called Pasaquan. Artist Eddie Owens Martin started building the seven-acre property as a home and workspace in 1957 and ended up with six major structures. After Martin’s suicide in 1986, the site deteriorated until 2014, when art preservation group the Kohler Foundation teamed up with Columbus State University to bring Pasaquan back to life. “To visit Pasaquan is a total immersion experience,” says Kohler executive director Terri Yoho. “You’re surrounded in otherworldliness.”

The restoration
Reviving Pasaquan has taken two years. Using archival photos, conservators from all over the country filled in cracks and reproduced patterned floors to bring back what’s been described as Martin’s “psychedelic Assisi in the Southern pines.”

Fever dream
The name “Pasaquan” comes from a fever-fueled vision Martin had, in which he was directed to depict a peaceful future for humanity. Soon after, he became a paid fortune teller to continue funding the project.

Caretakers
Kohler officially gifted Pasaquan to Columbus State University, and an artist will live at Pasaquan full time to provide security and maintenance and, presumably, gain inspiration from Martin’s work. 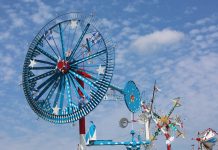 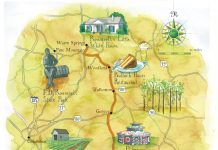