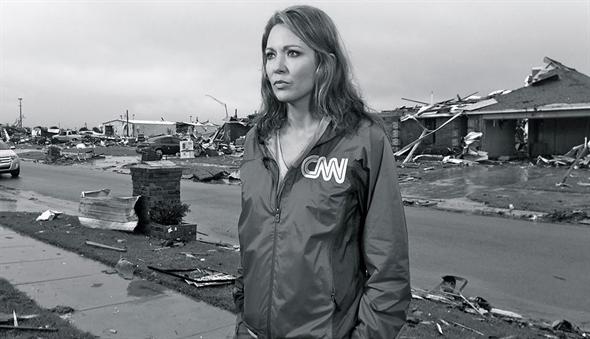 Two and a half minutes into an interview with Moore, Oklahoma tornado survivor Jackie Sing this past May, the moment every reporter dreads happened to CNN afternoon anchor Brooke Baldwin. With cameras rolling, Baldwin was standing with Sing in the debris field that used to be his front lawn, when the enormity of the last 72 hours finally caught up with the 42-year-old father of two and Moore native. As Sing related to Baldwin that he wished he could swap places with neighbors across the street, the parents of a newborn who lost everything in the disaster, he began to weep. A rain soaked Baldwin, clad in a red CNN slicker, hair yanked back in a makeshift ponytail, allowed the silence to hang in the humid air for what felt like an eternity by today’s television news standards and gave Sing a moment to compose himself. In the silence, Baldwin slid a supportive right hand onto Sing’s left arm. With his emotions now in check, Sing continued the conversation.

Since December, there have been many such harrowing moments for the 34-year-old Atlanta native and Westminster graduate. In quick succession, she’s covered the Sandy Hook school shooting, Barack Obama’s second inauguration, the Boston Marathon bombing and the tornado victims in Oklahoma.

Weeks later, back in an Atlanta CNN Center conference room following her afternoon anchor shift, Jackie Sing is still on Baldwin’s mind. “With every story like that you do, there is always that one person who is forever etched into your memory,” Baldwin reflects, still in her freshly pressed anchor outfit and high definition make-up as she slips her feet into a pair of gray Converse sneakers. “In Oklahoma, that person for me was Jackie Sing. We were all doing shows in his front yard and I decided to take a minute to find out his story. It was just intuition. The next thing I know, this man is walking me through his house and he’s apologizing for the mess. This is what people in Oklahoma do after the unthinkable happens to them. This man had a story and I just needed to listen. This isn’t rocket science. You just shut up and listen. And Jackie Sing ended up being emblematic of Oklahoma.”

In Boston, that person was firefighter and first responder Charles Buchanan, a 41-year veteran of the department who had never before given a media interview. “It’s so important to talk to the first responders,” Baldwin explains. “These are the people who see it first and run toward the danger and deal with the emotional ramifications of it for weeks afterward. Charlie Buchanan was the guy who put the blanket over [eight-year-old bombing victim] Martin Richard’s body. I told him, ‘I just want you to tell me your story.’”

Off camera, Baldwin takes the time to build rapport and trust. In Boston with Buchanan, she talked about the Red Sox game she had attended in Boston the weekend before the bombing. In Oklahoma, it was listening as Jackie Sing talked about his 13 and 14 year old kids. In many ways, Baldwin’s old school reporting style feels more akin to the golden age of CNN. The era when Ted Turner’s brainchild was run by Tom Johnson, a man best known for publishing the Los Angeles Times rather than the Twitter-age CNN run by Jeff Zucker, a man best known for lifting Today to ratings gold and making Katie Couric a household name. Then again, as a Westminster student, Baldwin literally grew up watching CNN reporters like Christiane Amanpour on her hometown 24 hour cable news channel. Unlike many of today’s cable news ratings standard bearers like Nancy Grace, whose on-air style often resembles a rabid hyena, howling for a next hit of Adderall, Baldwin satisfies her craving for red meat off-camera, with a bone-in rare filet at Kevin Rathbun Steak.

“Westminster is no joke,” Baldwin recalls of her Atlanta upbringing. “I took some tough classes there. It prepared me for a tough career. My drive comes from my parents and from Westminster. When I’m covering a story, it’s not just about gathering facts but it’s gathering the human element as well. It’s about how these people pick up the pieces and move on. It’s not about you or how jacked up your hair looks. If I can get those stories on the air, I’ve done my job. The journalism bug bit me in college and I remember driving past this building like a big ol nerd and just looking at it. Throughout my career, I kept telling myself, ‘One day I’ll get there.’ And here I am, a Piedmont Hospital baby, talking to Atlanta magazine. It blows my mind.”