Home News & Opinion Politics Cain: “I don’t even know who this lady is.”

At a press conference yesterday, GOP Presidential sorta-front-runner Herman Cain emphatically denied ever sexually harassing or behaving inappropriately with anyone. Said Cain of accuser Sharon Bialek,  “I don’t even know who this lady is.”

I think the big news at the press conference wasn’t the denial (which everyone was expecting) but rather who Cain now blames for the scandal. Last week, Cain blamed Republican rival Rick Perry for planting the sexual harassment story in media. At yesterday’s press conference, Cain shifted blame from Perry to Democrats. More precisely, Cain blames something he calls “the Democrat Machine.”

“And now the Democrat Machine in America has brought forth a troubled woman to make false accusations,” said Cain.

What exactly is the Democrat Machine? I’m not  sure, but my best guess is that it’s the world’s first functional time machine, used by crafty Democratic operatives to go back in time to the 1990s to plant sexual harassment allegations and settlement documents in the National Restaurant Association’s file cabinets.

I suspect it may be the same time machine Democrats used to plant President Obama’s birth announcements in August 1961 editions of Honolulu Advertiser and Star-Bulletin newspapers. 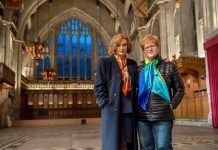