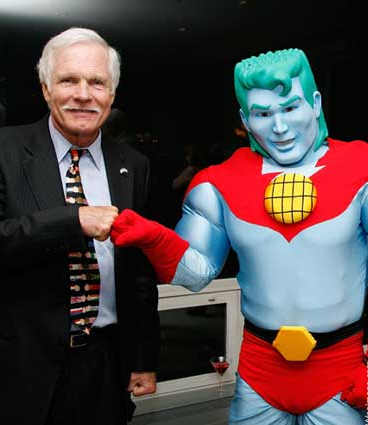 Captain Planet and the Planeteers, Ted Turner’s favorite cartoon series is about to soar to life as a live action flick on the big screen, thanks to Sony Pictures. The Hollywood studio is in final talks to acquire the rights to the 1990s environmental ‘toon series starring the eco superhero (whose powers apparently include recycling an algae-hued “business in the front, party in the back” hairdo). The series, created by Turner and his then in house environmental team at Turner, (including Captain Planet’s mom Barbara Pyle) was an attempt to work environmental themes into an action-packed cartoon series to bring awareness to the earth’s eco challenges to the Nirvana generation.

In a conversation with Atlanta magazine, Turner once reflected that the strategy paid off brilliantly. Today, whenever he gives a speech on college campuses, most of the students remember watching the show fondly and can recall their favorite environmentally themed episodes.

Let’s hope some of the actors who provided voices for the original animated series can be talked into reprising their roles for the live-action feature, including earth spirit Gaia (played by Whoopi Goldberg), and villainous serial litterers, including Verminous Skumm (Jeff Goldblum), Hoggish Greedly (Ed Asner) and yes, Dr. Blight (voiced by Meg Ryan!). Oh, and naturally, Sony should offer Turner himself a cameo since comic book legend Stan Lee seems to pop up in every Marvel big screen adaptation.