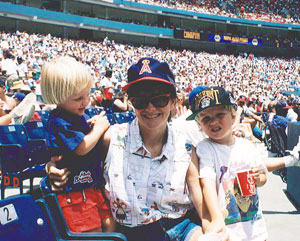 Listen you ITP people, there’s no reason to get personal. We Cobb residents didn’t ask for a baseball stadium any more than you Atlantans lobbied to kick the Braves out. Please direct your anger at Braves owner Liberty Media and your own elected officials. Hating on Cobb County is like an ex-wife blaming her husband’s new spouse, even though she’s the one who initiated the divorce.

I haven’t heard such vitriol toward my neighborhood since the mid-90s, when I used to wince whenever people asked where I lived. Then I was embarrassed by our county commission’s anti-gay resolution, which cost us an Olympic venue. Now I am just plain mad. This week I have heard my community called dystopian, fearful, and just plain uncool. Coworkers have brought out the old trope about Cobb refusing MARTA because of racial divides. Get over it, already. That was more than forty years ago. Wheeler, our neighborhood high school, has way more diversity than your hipster charter school. For urbanites espousing to rise above prejudice, you sure can pull out the stereotypes.

And don’t even get me started about walkability. Yes, you loft dwellers can walk to bars. I can walk to the Chattahoochee. My sons spent summers building forts in the woods and safely roaming for blocks playing man hunt until the street lights came on. You call it “green space.” We call it the back yard.

The boys also spent summers going to Braves games. We split a season ticket package with friends, and my eldest was barking for Fred McGriff long before he’d heard of the Georgia Bulldogs. We once lucked into prime seats right behind the dugout. When a foul ball rolled our way, our then-five-year-old son picked it up and tossed it back into play.

Now twenty-four, he had a perspective on the Braves’ move that I hadn’t expected. His immediate fear was that suburban kids would lose their connection to the city. Now, he said, Atlanta was just going to become a place where you go on school field trips. There are only a handful of Falcons games, and they’re just not that kid friendly.

Like most of our neighbors, we moved here because of Atlanta, not because of Cobb County. Your loss is our loss. In a city that measures its history in decades, how could its leaders and the Braves organization be so cavalier about destroying nearly fifty precious years worth of tradition?

So please quit sniping at suburbanites. Like it or not, Cobb County is part of Atlanta now. It’s called a metropolitan area, folks. How many of you carping at Cobb County actually live in DeKalb? I don’t want your damn stadium. Someday I want to take my grandkids to Turner Field and say this is where we watched the Olympics, and over there is where Fulton County Stadium used to be, that’s where your dad tossed a ball back into the game, then take them to the Varsity.