Home News & Opinion Commentary Commentary: I’m not much of a sports fan, but I hope the... 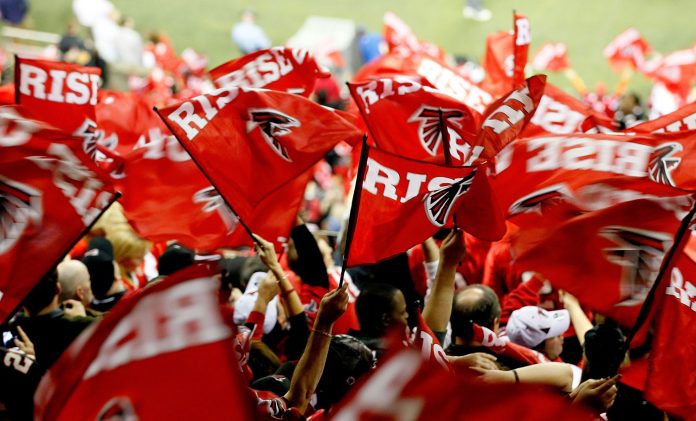 There’s an old saying, one you’ve probably heard before: The definition of insanity is doing the same thing over and over again and expecting different results.

Over the years, I have had several moments where I began to believe that definition precisely described several members of my own family. Because for the life of me, I could not and still cannot understand their unwavering support and love for the hometown football team, the Atlanta Falcons.

But with an 11-5 record this season and their clinching of the NFC South back in December, many are suggesting that at long last, 2017 could finally be the year the Dirty Birds claim Super Bowl gold.

I’ve spent my entire life in or near Atlanta. I have a blurry memory of riding into downtown in my father’s royal blue Chevy pickup truck as a kid, my head hanging out of the passenger side window as we made our way to the Atlanta Fulton County Stadium—the home of the Falcons before the Georgia Dome was built in 1992.

I remember my father, who has always been a diehard Falcons fan (somewhere, my mother has photo of me as a baby with a white Falcons skull cap fit snugly on my head), dragging me to a game or two, sometimes carrying me on his shoulders. I remember the thick sea of people making the trek from their cars to the ticketing gates. I remember the gravel parking lots blocks away from the stadium. And I remember my father’s determination, his focus, to get us from that truck, through the masses, and into our seats before kickoff.

These memories are snapshots—moments of ecstasy from my dad and the people around us when a player would fight their way into the end zone, gaining a Falcons lead. Moments of when I would just want to get a snack, and my father, so focused on the game, would plead for me to be patient.

I was never really into sports, so it didn’t matter to me what happened on the field. But these games were bonding moments for me and my dad. As his baby boy, I am sure he wanted to pass down his unwavering love and support of the team to me. Even as a kid, somewhere deep down, I understood this. So I committed to sharing these quality-time moments with my old man, until my love for music and writing became top priority. (The only other time my father and I attended any sporting event together was during my senior year of high school. I was trumpet section leader in the marching band, and he came out to support.)

I haven’t been to a game since. NFL games are expensive, and with the record this team has had historically, I just could never see myself investing in a game when the odds were the Falcons would lose–and lose bad.

That loser reputation never deterred my dad from loving the game and loving the team. Talk about the audacity of hope. But that’s the thing about Atlanta Falcons fans—they are some of the most loyal, most committed around. My sister and my nephew, as well as my dad, are definitely the “I will never leave nor ever forsake you” fans. They are like unicorns—unreal, magical even. And their love for the Dirty Birds, no matter how many times they lose, is unshakable.

“One day we are going to bring a championship home,” my nephew, who is 31 and still lives in metro Atlanta, texts me one evening as if he is actually a player on the team.

“I have always been a diehard fan. It’s the home team. I can’t go against the home team,” he states with a sense of are you serious in his tone. The Falcons could lose for the next 10 years straight, and his commitment won’t change.

My sister is such a diehard that she’s followed the team on away games. New Orleans? Tampa? You name it; she made the drive even when she didn’t have tickets to the game. Just being in the city was enough.

Once, before a Saints/Falcons match in New Orleans, she posted a photo to Facebook of her gear for the weekend: An Atlanta Falcons pillow; two Falcons athletic hats (one red, one black), a red Falcons skull cap; a Falcons hoodie, jacket, and two long-sleeve Falcons t-shirts; and a Falcons watch, necklace, and backpack. She’s changed her profile picture to the team’s logo, regardless of if the Birds are winning or losing. Her “RISE UP!” is usually the most prevalent in the room.

The team has made the playoffs thirteen times in franchise history—this year is the first time in the last four. And the only time they have ever made the Super Bowl was in 1999, even though they have clinched the NFC South title four times. I could be wrong, but I think for a lot of fans, relatives of present company included, finally winning a Super Bowl championship would almost mirror the night President Obama was elected—a lot of tears and lots of “I never imagined this would happen in my lifetime.” 2017 might finally be their year.

While I’ll probably just keep tabs on the game via social media, my dad, who is 83 and partially paralyzed due to a stroke last spring, will definitely be watching from home. Everyone in my parents’ house knows to make sure he doesn’t miss this game. In fact, I don’t think he’s missed a single televised game this season.

I admire the passion of my dad, my nephew, and my sister. I admire their commitment and their excitement. I’m almost envious of their ability to be so staunch in their support and admiration for this team, no matter how many plays they blow, how many games they lose. They’re my family, so, of course, I always want the Falcons to do well.

But I’ve been thinking about my dad a lot since his stroke. I know how much it would mean to him. It would be a big deal if the Falcons make it to the big game. If they were to win, it would be the ultimate gift for a lifelong fan. I want that for him.

But even if they lose this weekend against Seattle, one thing is for sure—true Atlanta Falcons diehards won’t ever lose hope.

Mashaun D. Simon is an award-winning journalist, preacher, and scholar whose writing and research engages issues of race, faith, identity, and equity. A native of Atlanta, he was raised in Decatur, Georgia, and tweets at @eldermadosi.