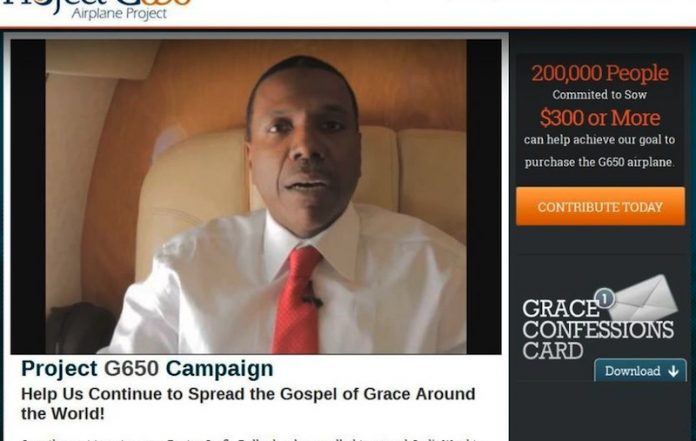 Let’s unpack Rev. Creflo Dollar’s request for $60 million from supporters for a G650 jet for the hustle it really is: a salesman using the door-in-the-face trick.

Ask for something outrageous, and when the world laughs and says no, dial down to something that sounds comparatively reasonable, even though it’s probably not. On Friday, the Rev. Dollar posted an online video suggesting that his followers chip in to help him replace an aging private plane—and thus continue round-the-world spreading of the Gospel by Dollar, his wife Taffi, and members of his College Park World Changers Church International. By the end of the day, the video was removed from the web, and Dollar was the object of social media flaming.

A colossal tactical error, right? No. Dollar enabled  an old-school sales compliance technique practiced by everyone who’s worked a phone during an NPR membership drive. The good reverend can come back with a more modest request and cite the struggle of fundraising in a faithless world. His people will fall for it. And by laughing at Dollar, we’re helping him.

When police arrested Dollar on child abuse allegations in 2012, social media filled with scorn. But did you see his defenders? People who have supported him in the past really, really don’t want to believe they’d been conned. So his followers doubled down in exactly the same way that people keep thinking that 9-11 was an inside job or Obama was born in Kenya or vaccines cause autism. The rest of us might claim to hate these people. But our hate makes it worse.

Let’s put this to bed: Creflo Dollar cannot financially justify owning a G650 jet any more than any preacher anywhere can justify driving around in a Bentley or lining the walls of the church with Italian marble and Corinthian leather or living in a fabulous gated mansion. This is especially true when that preacher lives in metro Atlanta, amid one of the widest gaps between wealth and poverty in America.

The whole idea disgusts anyone who isn’t in on the game.

A 2007 AJC article pegged World Changers at about $69 million a year in revenue. If that seems outlandish, consider what 50,000 people putting a $20 in the offering plate once a week means: $50 million a year, not counting sales at the gift shop. Dollar’s congregants aren’t poor. That’s a myth. They’re gullible, and they’re committed. But they’re not poor. Dollar wouldn’t bother ministering to poor people. That’s not where the money is.

But God giveth, and God taketh away. Lo, witness the fall from grace of Bishop Eddie Long, who has been abandoned by the power brokers of Atlanta, forced to close satellite ministries in other states, and probably can’t get a good table at Paschal’s on short notice any more, not since he settled allegations of improper contact with male members of his church.

I would like to think this is the shock that sends the sheep running from the guy with the shears. But consistency is a powerful psychological force, and Dollar has mastered it.

Publicity has drawn attention to his cause. When God tells Dollar he only needs a $5 million plane next week, he may just get it.

Atlanta-based journalist and commentator George Chidi is working on a book about civic participation which includes a section on the role of the African American church in politics and the impact of “Prosperity Gospel.” He tweets at @neonflag