Home News & Opinion Crime & Courts Crusader with a camera: Nydia Tisdale has been flipped off, called a...

In August 2014, three months before statewide elections, Georgia Republicans staged a public rally at a pumpkin farm in Dawsonville. Governor Nathan Deal was there, as was David Perdue, looking to defeat Democrat Michelle Nunn in the U.S. Senate race.

In the front row sat 51-year-old Nydia Tisdale in a floral sundress. Right before Insurance Commissioner Ralph Hudgens began his speech, she pulled out a handheld camcorder. Recent remarks by Nunn, Hudgens said, made him “absolutely puke.” He then pointed at Tisdale, her camera trained on him. “I don’t know why you’re videotaping, but yes, I said that.”

Tisdale is, for lack of a better term, a “citizen journalist,” a label that’s taken on greater relevance as video recording has become more ubiquitous and as conventional media outlets have shrunk. Citizen journalists often straddle the line between reporter and advocate. Since 2011 Tisdale has recorded hundreds of videos of elected officials and political candidates in public settings, uploading them to her website, unedited and without commentary. “The camera can see better than I can, hear better than I can, and remember better than I can,” she says. She describes herself as nonpartisan.

Before the Dawsonville rally, Tisdale says, one of the farm’s owners had given her permission to record. Still, it wasn’t long after Hudgens’s speech began that two GOP operatives asked her to stop. She ignored their requests. A few minutes later, a hand covered her lens. Captain Tony Wooten, a Dawson County sheriff’s deputy providing security at the event, hoisted Tisdale out of her chair and, pinning an arm behind her back, frog-marched her away.

“What is your name, sir?” Tisdale can be heard screaming on the recording. “Identify yourself! Let go of me!”

In a civil rights lawsuit she filed earlier this year, Tisdale alleged that Wooten slammed her onto a countertop, causing bruises, and pressed his groin against her buttocks until two more officers arrived to arrest her for criminal trespass. She bonded out of jail a little after midnight.

In November 2015, more than a year after her arrest, Tisdale was indicted for felony obstruction of an officer and two misdemeanors. She says the charges, which carry the threat of up to seven years behind bars, came in retaliation after she announced her intent to sue. The first hearing in the criminal case has been scheduled for October 4.

Tisdale’s arrest and subsequent indictment outraged criminal defense attorney Bruce Harvey, who took on Tisdale’s case pro bono. “You have to recognize the right of the public to film activities that occur in a public place. If you take that away, the liberal democracy that we live in ceases to be truly liberal or even democratic.”

The closest Tisdale has ever come to working in journalism was as a copy editor for the student newspaper at North Carolina State University in her hometown of Raleigh, where she earned a business degree. She moved to Georgia in 1988 and spent more than a decade working as a commercial property manager, settling in Roswell.

Her activist streak was kindled in 2008, when a Forsyth businessman proposed building a 23-acre landfill near Georgia 400, prompting fierce opposition from neighbors. Even though she lived several miles away, Tisdale became fixated on the case, compiling a 151-page dossier filled with zoning documents. It took three years before county officials nixed the proposal. Tisdale was outraged the county had allowed so many people to spend countless hours battling over a landfill that she thought should never have been considered in the first place. The fact that the applicant had gone bankrupt over the failed project further fueled her anger.

Tisdale began attending up to three public events a day, from local ethics board work sessions to Gold Dome press conferences. She recorded meetings on an old Hi8 video camera, until her husband bought her a $1,500 digital camcorder. She left her job in 2010 and bought an existing community forum website, AboutForsyth.com, for $100. Since then, she’s posted more than 850 videos—“Nydeos,” as she calls them—that have been viewed more than 250,000 times.

Usually a silent fixture at public meetings, Tisdale pipes up if she believes officials are violating sunshine laws by failing to circulate agendas or post proper public notices. When they don’t listen, she’ll use her footage to support the handful of legal and ethics complaints she files each year.

“If only one person watches,” says William Perry, former head of Common Cause Georgia, “that person could go on to accomplish something.”

250K
Number of times her videos have been viewed 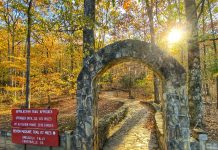 Spring into a weekend getaway in Dawsonville, Georgia