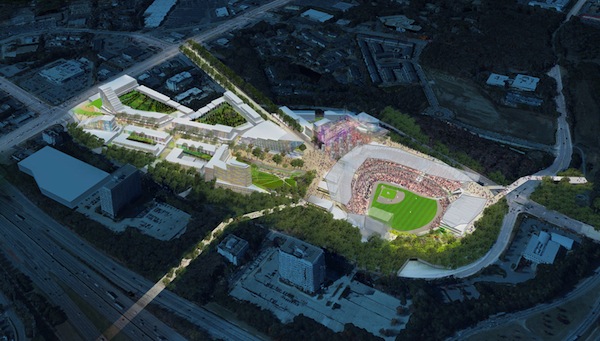 Secrecy helped Cobb County hammer out a deal to lure the Braves from their downtown Atlanta home. That same stealth may have violated Georgia’s Open Meetings Act and, conceivably, cost taxpayers millions of dollars.

At least twice in November, Braves boosters briefed Cobb commissioners privately on plans to help build the ballclub a $672 million stadium, officials who were in the meetings say. Lawyers, department heads, Braves bigwigs, and chamber-of-commerce types attended at various times—but the taxpayers who will foot much of the bill were kept in the dark.

Commissioners’ November 26 approval of the Braves deal came just 18 days after their first top-secret briefing on November 8. Commissioners gathered again privately on November 13—two days after the public announcement of the team’s relocation—to kick around the details, even as some Cobb residents pushed for a closer look at the deal’s fine print and for more time to consider its terms.

At both the November 8 and November 13 meetings, the five commissioners used a “revolving door” format so only two of them would be in the room at once. No quorum existed that way, officials contend, so open-meetings requirements did not apply.

Transparency advocates, though, describe that practice as a “rolling quorum” that circumvents the spirit and letter of the law.

Georgia law requires public access whenever a quorum of a governing body gathers to discuss public business. Certain exemptions exist, but not for gatherings that are held primarily “to evade or avoid the requirements for conducting a meeting while discussing or conducting official business.”

Cobb officials don’t see these closed briefings as undermining the public’s right to know. “I feel like it was to brief us first, to give us an understanding of what was being proposed,” Cobb Commissioner JoAnn Birrell said of the November 13 meeting. “I mean, we hadn’t seen the financials . . . [and] everything that we would have to approve.”

Perhaps. But hindsight suggests that the second meeting, held two days after the Braves’ announcement, might have been an ideal opportunity to allow public access, while there was still time to vet details of the deal. After that meeting was held, outside scrutiny has raised doubts about the constitutionality of the financing plan, the accuracy of new-job estimates, and possible hidden costs to the public.

Cobb’s “Memorandum of Understanding” with the Braves, for instance, contains no deadline for the team to complete an adjacent $400 million retail/entertainment district. That omission “erased any confidence I had in the document,” Commissioner Lisa Cupid, who cast the sole dissenting vote on the MOU, said in an interview. “The more I go through the document, the more I see the minor things that weren’t even considered.”

Nor does the deal bar the Braves from seeking tax breaks on sales of tickets, food, and team merchandise. As we reported in December, the Braves are eying a variety of state incentives for the new stadium, including a 10-year reprieve on all sales taxes available to newly built tourism destinations.

Cobb is counting on those sales taxes to help pay its $17.9 million-a-year share of financing costs for the stadium. If the tax revenue falls short, the county will have to find another source of cash.

Questions about tax breaks, jobs, financing, and other specifics might have been aired Friday, November 8, when commissioners Birrell, Cupid, and Bob Ott all hustled on short notice to the commission’s offices. Commission Chairman Tim Lee was waiting for them there with Braves executives John Schuerholz and Mike Plant.

The commissioners were ushered into Lee’s office one at a time, thereby avoiding a quorum. “As I was coming in, JoAnn [Birrell] was leaving,” Cupid said.

The commissioners were sworn to secrecy, though, cautioned against telling even their spouses. Lee deferred to the Braves to publicly unveil the deal the following Monday.

The following week, commissioners were called to the Chamber of Commerce for the November 13 briefing that Lee said was organized for their convenience. The meeting couldn’t have been public, the chairman said, because there wasn’t enough time to post the necessary 24-hour advance notice.

The timing was less than convenient for Cupid, who said she was summoned abruptly and had to leave another event early. Once she arrived at the Chamber, Cupid had to cool her heels outside for 90 minutes until Commissioners Ott and Helen Goreham left the briefing.

Cupid, who had to leave an hour later for another commitment, said she was “unsettled” by the turn of events. “I felt like we were in a time crunch, and this was too significant a decision,” she said. “It was disrespectful of my time and the level of involvement required of me as a commissioner.”

Lee cut short a recent interview with me on the transparency of the process upon learning that the First Amendment Foundation’s Manheimer had questioned the legality of the closed meetings. Later, after consulting with county attorney Deborah Dance, a spokesman released a statement saying simply, “No quorum existed during briefings on the stadium project while at the Chamber of Commerce.”

The Open Meetings Act defines a meeting as “the gathering of a quorum . . . at which any official business, policy, or public matter of the agency is formulated, presented, discussed, or voted upon.” All of the commissioners “gathered” at the same time at the Chamber, where they discussed some very big business. They just weren’t allowed in the meeting room at once, a practice that could be seen as intended “to evade or avoid the requirements for conducting a meeting.”

Cupid said she felt an urgency because Lee was insisting on the November 26 vote. But internal documents show negotiators, just a few weeks earlier, had been planning for a December 10 vote.

Cupid said she “urged” her fellow commissioners to take more time before voting, but couldn’t even win a two-week delay—to December 10. “I asked [Lee] more than once,” she said. “The answer was immediately no.”

Braves executives insist that December 10 was just a target date, and the vote was moved up when negotiators finished the MOU faster than expected. “We were excited about the prospect for an earlier vote which helped us get the project moving forward,” Braves Executive Vice President Derek Schiller said. “Every day mattered.”

Cupid said she wonders whether the quick vote was as much about politics as logistics. She said boosters told her if the decision were delayed, “All you’re going to do is give an opportunity for the opposition to build a case on their side.”

That sentiment, in a nutshell, illustrates the problem that people in power often have with transparency. Sharing information in a timely fashion with the “other side” means decisions will more likely be based on all the facts, not just those released by the people in charge.

And in both politics and baseball, as opposed to governance, winning is everything.