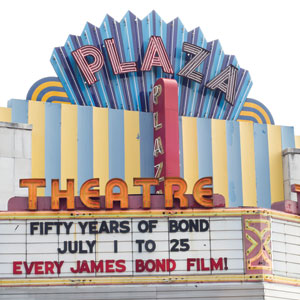 Here’s a quick synopsis of On Her Majesty’s Secret Service: James Bond, played by George Lazenby (for the first and only time), travels in disguise to a remote research facility (literally) on top of a Swiss mountain to spy on super-villain Ernst Stavro Blofeld. Thuggish henchmen take Bond through the facility and deposit him in his room where he is told he can’t leave without an escort. Sinister indeed. He’s later retrieved and escorted to dinner; you half-expect to see Blofeld grinning maniacally from a high-backed chair, stroking his trademark white cat. Rather, Bond walks in on an array of scantily-clad women.

If you were seeing this in a theater when the film came out forty-four years ago, you might have heard nervous shuffling or a few coughs, but at a recent Plaza Theatre screening, there was a different response–laughter. And lots of it. My friend leaned over and whispered through giggles, “They can’t really be serious!”

Sure, there’s no plausible reason of a bevy of beauties would happen to lounge in skimpy outfits at this extremely remote location that Bond would just happen to visit. Still, the laughter puzzled me. This is James Bond we’re talking about; isn’t he supposed to be surrounded by women? No one laughed when Halle Berry rose out of the ocean in that orange two-piece in 2002, and I would venture to assume that back in the 1970s, the audience didn’t burst into laughter when Bond entered Blofeld’s lair.

Perhaps—thanks to Austin Powers spoofs—we’re all too jaded take the old Bond seriously.

Consider Skyfall, which plays tonight at the Plaza Theatre as part of its 007 film fest. Bond, played by Daniel Craig, is also forced to a secluded location, but he has only his family’s old, crotchety groundskeeper for company–a far cry from the ladies of the Lazenby film.

Where Lazenby’s Bond at times has the almost tongue-in-cheek “look what we’re getting away with” vibe that the Austin Powers series satirized, Craig’s Bond remains the gritty super-spy whose circumstances are fanciful, but not necessarily ridiculous.

Sure, differences are expected over the course of four decades, but Lazenby was nominated for a Golden Globe, and Skyfall did well with critics, so something must have been right about both films. Quite simply, they both appealed to their era’s audience.

Seeing the movies at the Plaza isn’t just a rare chance to see an old flick on a big screen, but also a chance to experience the series in a different way. Now’s the perfect time to go, too. Skyfall will be followed by two nights of fan favorites, so you can catch the best of both worlds. And hey, if you’re going to laugh at an old movie, it’s a lot more fun to do it with a full theater than by yourself on your couch at home. Not that I ever do that…