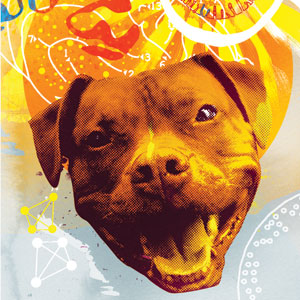 A pit bull named Petey is romping around twenty months after undergoing an investigational brain tumor treatment—developed at Emory University in conjunction with the University of Georgia’s College of Veterinary Medicine.

After Petey’s tumor was partially removed by UGA surgeon Simon Platt, he received an experimental treatment created by Dr. Costas Hadjipanayis, assistant professor of neurosurgery at Emory, chief of neurosurgery at Emory University Hospital Midtown, and president of the Southeastern Brain Tumor Foundation. It combines the drug cetuximab—used to treat head and neck as well as colorectal cancers—with a magnetic iron oxide nanoparticle that enables researchers to see the drug in the brain during an MRI.

With a $119,000 grant from the AKC Canine Health Foundation, up to fifteen more dogs will test the therapy. We asked Hadjipanayis to explain the treatment of these tumors, called spontaneous gliomas.

How does the drug work? One of the challenges in cancer treatment is we give patients these drugs and treatments and have no idea where they go. They go in an IV and all cells in the body get affected. When the MRI can pick up iron oxide nanoparticles, we can see it and also target the cancer cells. Plus we found that combined, the treatments kill cancer cells better than either by itself.

How did Petey’s treatment go? Petey showed up with a massive brain tumor; we all thought he was going to pass away pretty quickly. Petey went to surgery and they took a little part of his tumor out. He underwent an infusion of [this treatment] for two days. He immediately stopped having seizures. We got an MRI at six weeks and knew we had targeted the tumors well. We got an MRI at five months and the tumor was gone. Petey is doing great.

Why dogs? Dogs present the same way as humans. They have the same biology. The similarities of canine gliomas to gliomas in humans include poor prognosis, the way they grow, and the way they show up on MRIs. We’ve already kind of shown that it has success in dogs. Ultimately we want to translate this to a human trial. There are 15,000 to 20,000 primary malignant brain tumors diagnosed every year in humans. The typical prognosis is fifteen months, despite surgery, radiation, or chemotherapy. Petey already exceeded that—and he didn’t get any other therapy.