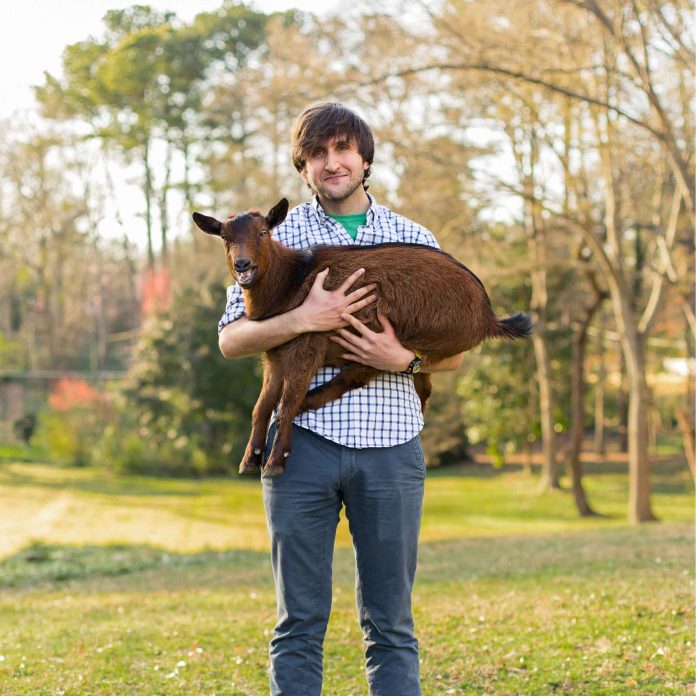 Ben Callner is twenty-eight and lives in the basement of his girlfriend’s parents’ home in Decatur—by choice, he insists, not necessity. A graduate of Pope High School and Georgia Tech, Callner is a director at Pogo Pictures, a commercial production company based in Atlanta and founded by Steve Colby. Callner and Colby’s “Goat 4 Sale,” a thirty-second Doritos commercial featuring a ravenous and vengeful screaming goat (played by the cloven-hoofed Moose, owned by Colby, and voiced by Keith, a childhood friend of Callner’s), won the snack company’s sixth annual Crash the Super Bowl Contest, which takes a crowd-sourcing approach to advertising. It wasn’t the first Super Bowl commercial success for Callner, who won a Georgia Lottery contest four years ago. But the goat ad came with a $25,000 prize. Nielsen announced that the spot was 2.21 times as likable as the average 2013 Super Bowl ad and was viewed by some 108 million Americans. “I love living in the basement,” laughs Callner, “but when I’m hired as a director, I don’t want people to know.”

Did you study film at Tech? I did one year of industrial design before realizing I wanted to do film. The closest thing to film there was called Science, Technology, and Culture—like sociology with an emphasis on film. I got an internship at Pogo and showed them a film I’d made for fun. Steve was really quiet; it wasn’t that good. But he must have seen something. He called me after I graduated and asked me to help with an online version of Pogo. I wasn’t paid initially, but even after the online version wasn’t successful, I kept showing up and pitching ideas. That was six years ago.

Has your work or personal life changed noticeably since the contest? It’s definitely bringing in work. Otherwise, I still have the same girlfriend, still live with her parents, still drive my ’98 Honda Accord with 216,000 miles. What’s changed is the excitement. I get all these emails that people have seen the ad on this channel or heard it on Pandora. I think the only way this could ever happen again is if I made a movie. But right now, commercials are such a challenge. It’s so hard to tell a story that sells something in thirty seconds.

What was your girlfriend’s parents’ first reaction? When they found out that I was a finalist, Alicia’s mom was concerned that we were going to move out if I won any money. They like me at their house because they’re away for work a lot and otherwise it’s just Alicia there alone.

Be honest: Do you actually like Doritos? They’re probably not the best thing to eat every day, all day, but they’re strangely addicting. You have one and then you want another. I’m a sucker for the sweet and spicy chili that comes in the purple bag.

Have you ever eaten goat? I have not. [Laughs] Goats are so sweet. If I had to butcher my own meat, it would be very easy for me to be a vegetarian. That said, our commercial opened up how funny goat screams are. Taylor Swift’s song “I Knew You Were Trouble” now has a goat scream in it, a Justin Bieber song has a goat scream in it. It’s started this craze. If we had the rights to that, wow.