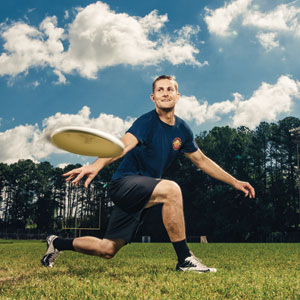 One of Atlanta’s world-class athletes doesn’t pitch a baseball or carry a football. Dylan Tunnell excels in a sport, Ultimate Frisbee, more associated with the college quad than packed stadiums. But in late July, the twenty-nine-year-old will journey to Cali, Colombia, as one of thirteen Americans representing his country in Ultimate at the World Games. He won gold in the competition in 2009 and is looking for a repeat.
In case you aren’t familiar with the sport, here are the rules in brief: Each team of seven tries to complete tosses into the other team’s end zone. First to score fifteen times wins. The sport is extremely competitive but retains a mellow vibe—players self-officiate, even at the international level.

Ultimate doesn’t pay like the mainstream sports, however, so Tunnell works a “day” job—as a firefighter at Station 9 on the city’s west side. “When I first started, I was a little embarrassed,” Tunnell says of telling his AFD colleagues about his athletic pursuits. Firefighters, he says, tend to be “more traditional jocks.”

Tunnell works twenty-four-hour shifts every third day, and to squeeze in practice time often has to swap shifts, meaning forty-eight-hour stints followed by the physical punishment of a weekend running down Frisbees. Add in a new daughter, and it’s a wonder he remains upright. “At this point I’m quite good at functioning on small amounts of sleep,” he says.

An Atlanta native, Tunnell attended the Paideia School, which has built a reputation as an Ultimate powerhouse. The school’s coach (and elementary school phys ed teacher), Michael Baccarini, instills the idea in young Paideia students that Ultimate is as authentic a sport as basketball or football. The informal, nontraditional ethos Paideia prizes helps too. “Certainly the culture of the school welcomes the personality type that tends to gravitate toward the sport,” Tunnell says. A 2002 graduate of the Druid Hills independent school, Tunnell is just one of several alums (including his sister, Leila) to play at the top levels of Ultimate. One of Tunnell’s 2013 World Games teammates, George Stubbs, also played for Paideia.

Tunnell plays in tournaments or practices nearly every weekend from May to October, mainly with his local club team, Chain Lightning. Ultimate requires an ultra-fit combination of stamina and quick-twitch cutting and sprinting; elite players can run the equivalent of a marathon over the course of a tournament. Laid-back types seeking a relaxing throw-and-catch in the park need not apply. “Add in a couple of workouts per week, and it’s not far off from being a pro,” Tunnell says.