Home News & Opinion Arts & Events For these six artists, nature is both a catalyst and a muse

Pam Longobardi is an Atlanta-based professor, artist, and founder of the Drifters Project, which mobilizes cleaning efforts along coastlines around the world. She is known for her assemblages, abstract paintings, documentary photos, and large-scale installations made of discarded plastic collected from waterways and beaches. Each piece turns clunky, artificial objects into large-scale, organic artwork that documents the conflict between the environment and human consumption. Like other nature-focused artists, her art sees both the environment’s beauty and its proximity to peril. Here are five more artists doing the same: combining nature, art, and climate action. 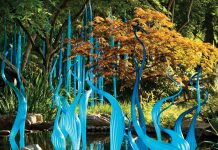 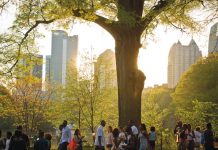