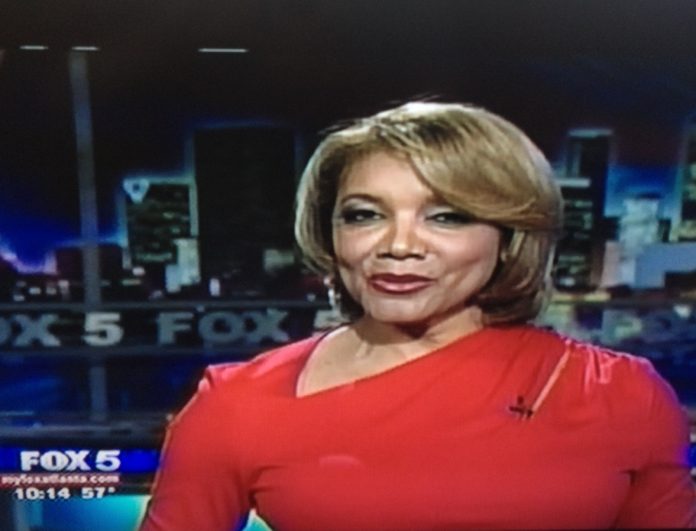 It was weird. It was awkward. Then again, when you’re up against a fresh episode of “Scandal” on ABC at 10 p.m., you’re likely to do anything to inch up ratings. After 24 hours of promos and social media missives about “Amanda’s Special Message” to viewers, the longtime Fox 5 news anchor Amanda Davis returned to the airwaves Thursday night. To retire. On camera.
Davis has been off the air since last fall after a DUI arrest in Midtown, following a wrong way crash on Piedmont Avenue. Until Thursday night’s announcement, it remained unclear what Fox 5 management would do with the much-beloved Atlanta news veteran and host of Fox 5’s popular news segment “Wednesday’s Child.”
After teasing the segment for 13 minutes, Davis’ co-anchor (and “TV husband”) Russ Spencer told viewers, “Amanda Davis is here tonight.” (Technically, though, she wasn’t. Davis and company actually recorded the segment on Wednesday and I’m told that Davis was out of town Thursday when the message aired).

Looking red carpet ready in a red dress and matching lipstick, Davis, standing in front of the anchor desk, smiled and told viewers: “I have seen and heard and reported on stories from Bankhead to Buckhead to the White House. There have been awards, honors and accolades. There have also been challenges, disappointments and stumbles. But yea, though I walk through the valley, with God’s help, I made it though. And that’s what I want you to know. I am blessed. So, it is with a heavy heart that I announce I am officially retiring from Fox 5 as I look ahead to a new chapter in my life. So, with much love and appreciation, I say thank you for your love and support.”

While many viewers anticipated an apology from Davis or perhaps an announcement about a return to the anchor desk, she did not directly refer to her DUI arrest. At points, the televised message felt forced and contrived, like it had been vetted by a team of lawyers. Still, in WAGA-TV’s defense, it’s rare in the TV news business for a station to green-light such a classy piece of closure for viewers.

Spencer and meteorologist Ken Cook then joined Davis on set to introduce send-off tributes recorded earlier this week from friend and former WSB anchor Monica Pearson, former Atlanta mayor and UN ambassador Andrew Young and V-103 morning man Ryan Cameron.
Reflected Pearson in an interview recorded at her home: “When I think of her, I think of ‘Wednesday’s Child.’ In that feature, you saw a maternal instinct, you saw her warmth, you saw her compassion and you saw her love. She’s a mom but she’s a mom to everybody.”
Young added: “We know her, we love her and she’ll find a way to be involved. And we’ll be right there to help her. My wife and I consider her a part of our family. We’re proud of the work she’s done in this city for so many years.”
Concluded Cameron: “Atlanta has always loved you, Amanda. I’ve always been proud to call you a friend.”

The nine-minute segment ended with a retrospective of Davis’ career, including her coverage of Coretta Scott King‘s funeral and her interview with president-elect Barack Obama. While Davis still awaits a court date in her case, she plans to remain in Atlanta. She told viewers, “I’ll still be in town so if you see me around, say hi.”