Launched last year by Judson Mitcham, the state’s poet laureate, in collaboration with the Georgia Council for the Arts, the Georgia Poet Laureate’s Prize is an annual program designed to encourage works by teen writers. It is open to all students in grades 9 through 12. The winner and finalists, profiled below, visit the state capitol and the governor’s mansion. “Involvement in reading and creating poems can enrich any life,” Mitcham told us when the program was created. Read more about its inception here and meet the 2015 winners and finalists below.

McPherson Newell is a sophomore at Lakeside High School in Evans, Georgia. She is a member of the speech and debate team, Lakeside Review staff, Dead Poets Society, and cross country team. In addition to writing, she enjoys photography, drama, music, and travel.

It is snowing in Beijing
for the first time in a century.
The people’s hair strands
leap like static has replaced the contents of their veins.

In this town
I count the hours since I started missing you.

Their eyes stop spitting iron brands
and gulp the sunrise in as if the frost was not
enough, as if
light has preferences
for the locations of its blessings.
The officials have the bribery of a good mood.

Meanwhile,
the sleet between our cities is like stained glass.
I cannot slip through the door without
humming your address.

They are teaching themselves about angels.
They are saying they should sing.

Oh if you were a siren I would’ve jumped ship

They are pressing handprints into
the fabled whiteness, flaky myths
hesitant against their faces

Meet me in a coffeehouse

In this town
if you take a photo of the concrete at just the right angle,
you can make your eyes forget where they are.

Michael Chaparro lives in Maysville, Georgia, and is a freshman at Jefferson High School. He plays trombone in the JHS Jazz, Symphonic, and Marching Bands, writes for the JHS quarterly newspaper, and is a member of the JHS Academic Bowl team. He devotes much of his time to studying the enigmas of philosophy, hypertext literature, classical and modern poetry, and music appreciation. When not devoted to his studies, Michael writes poetry and short stories, performs with his school’s thespian company, and distills his wide-ranging, yet refined, musical tastes further by listening to an eclectic mix of music, including experimental and classical artists.

Beneath the charred layers of the rickets-softened white of a battle-worn skull,
visions of insane acrimony play across the memory of yesterday’s skyward theatre.

A bestial chaos: the soft skin of a once immaculate landscape and her violation by a terrible incubus, his smoke of war beating into the sweet light of her eyes without cease,
his drums of hate shaking the feverish gas and penetrating the lungs of the collapsed;

Their eyes begging the flaming sky for all forms of deliverance, but heaven is ending too and their gaping mouths fill with blood.

The screaming phalanx quivers the ozone of the nightmare with a cacophony too evil to permit absolution, until the images cool into carbon effigies in the same mind as he gazes into the onyx teeth of oblivion. It leaps into the space above the earthbound form, tearing into the weak eyes with the thirst of leeches.

Swollen eyelids separate quickly to bare mad pinhead pupils and diluted irises while the new fury of the second light in the sunrise drowns them in surrounding white.

The soldier is trying to raise himself onto one battered leg and from a distance, it might appear as though a burning tree were simply following the rules of natural gravitropism, unfurling its limbs to the blazing sky, and with each new effort, his soot-stained branches are collapsing at intervals of increasing proximity, the frequency escalating with the elevated complication of the architecture of tired horror inside, toying with his anatomy like a colossal child; he is pushed over again and again into the malevolent tapestry of the battlesetting.

Ages of pure, unbelievable sightlessness, fingerless hands reaching out into the blindscape until dreamless sleep finally comes, a pale nurse in the night, aching eyes reflected in a trembling bowl of dirty water.

The silence is smothering, thick as boiling glass, and, flying above the sleeper, the celestial sphere is angry with swirling chemicals, drawn across the air by darkening wind, corrupted by its carriage of reticent sobbing.

In the succeeding placidity, a silent loss of hope is changing forms into a whole rest of bradycardia in the center of his broken frame, quietly overtaking the dying heartbeat as the distant cataclysms build to strike a unison chord in fermata resounding eternally in the stillness of the derelict twilight.

Isrial Clark is a senior and honor graduate at Crawford County High School in Roberta, Ga. He has participated in his high school’s marching band, concert band, and JROTC program for four years. His favorite hobbies include playing music and writing poems, and he is extremely honored to have his poem recognized as a finalist in the Georgia Poet Laureate’s Prize.

I go onto my porch at night/
When the little white spots glow/
From the darkness surrounding them/
There are many houses on this street/
Many porch lights are shining/
I stare at my porch light/
I notice the moths/
Crawling around the bulb/
Growing yellow with age/
I see some fluttering around it/
I see some flying in/
Hypnotized by the source/
So afraid to fly away/
From the warmth of the bulb/
And the comfort of others being afraid with them/
I drift off into a daze/
How many suns blaze?/
For we only notice one/
But there are many solar systems/
Many galaxies/
Many universes/
Many creators/
But we only recognize one/
No man knows the key to solve the riddle/
Or to find the light within himself/
And if such a man were to exist/
He will be surrounded by moths/

Hana Nazir is a senior from Johns Creek High School. She enjoys learning new languages, creative writing, and photography, and is a self-proclaimed science nerd. She is known for her spontaneous humor, random outbursts of trivia, and profound penchant for coffee.

The scent of jasmine is an intoxicating drug
that clings to the crisp air- softly, gently
whispering the ancient, withered secrets
that float like burnt, freckled leaves
All is well on this tranquil afternoon.

They gasp with admirable pleasure seeing
my mangled flesh with morbid delight
cooing like young mothers, whispering
as I clumsily stumble with internal anguish
How wonderful is womanhood.
Womanhood- an onerous, fraudulent affair
enclosing me in its vile, hungry tendrils
of tradition and purported sacrifice
strangling me till I choke out platitudes
of unconditional compliance.

The thick scent of jasmine dulls my senses
clinging to the sharp, crisp air that stings
as it roughly cuts into my tender wounds raw,
beaten to a pulp, to perfection.
All is well on this tranquil afternoon — so it seems.

Briana Spencer, known to her friends and family as “Bri,” is a senior at Northgate High School in Newnan. In the fall, she will attend Agnes Scott College as an incoming English major, where her lifelong love of and commitment to the written word will continue to grow.

The Holy Roman Empire Was Never Canonized
by Briana Spencer

all that we can offer at the altar
is what we carry in the soles of our
shoes. a heart like a cinderblock or a bruise
that beats itself new each day: calls this healing.
breathing out the ash licked off tabletops
in saunas as we collect what falls out of
the pockets of men with daughters.
phone numbers we cannot see to call. only
knock our tongues with our teeth like dancing.
oh, hallelujah, and all these words that sound
the same. rise with me to glory
and devastation.

these night skies follow you into a neverending
in which it all belongs to you. all except the wolves.
all except these things which call themselves honor.
too tired of crawling through your horror to
consider calling out home. watch the teeth bite back
the skin of an apple and turn the green into
gold; the gold into a mirror where the
fairest is
the only city still burning.

we will clean the wreckage of our absolutes, then.
turn these into statues that do nothing
but sing in museums and long for their own silence.
no matter how hard i pull at the coliseum, these
rocks will never bleed enough. 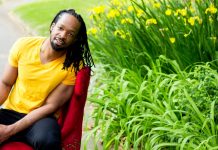