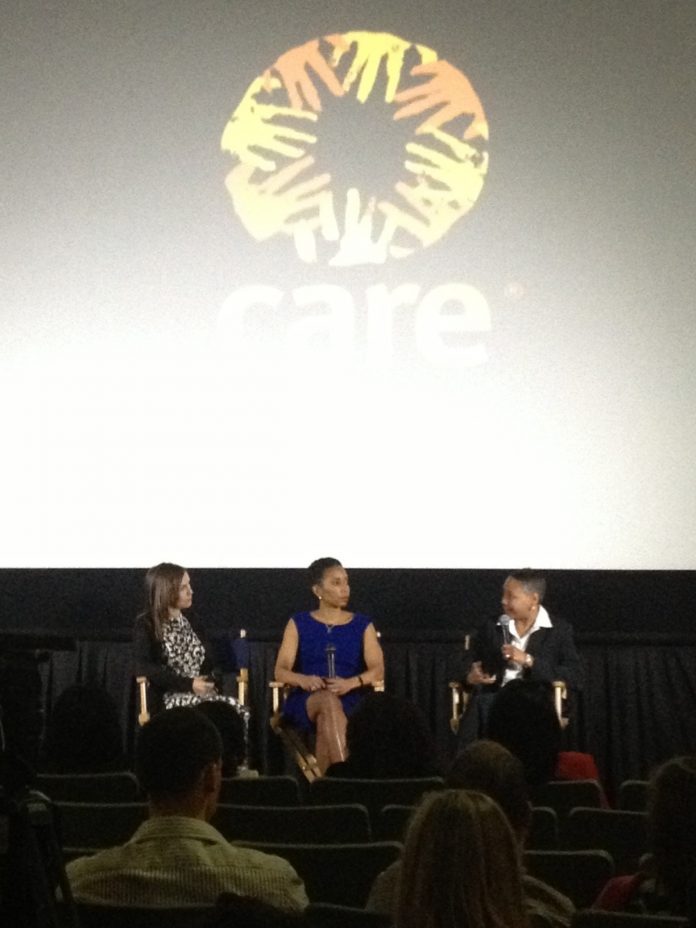 For former Atlanta City Council president and onetime mayoral candidate Lisa Borders, just days into replacing the iconic Ingrid Saunders Jones as Vice-President of Global Community Connections and Coca-Cola Foundation chair, Monday night’s screening of Girl Rising should have been an easy assignment. But the documentary, focusing on the stories of nine girls from across the globe who are beaten, raped, and sold into slavery as they bravely battle to get educations, is anything but easy. The film, produced by the Intel Corporation and distributed by CNN Films, features narration by Meryl Streep, Anne Hathaway, Alicia Keys, and Selena Gomez. It is equally empowering, educational, and at points, harrowing to watch.

The VIP Atlanta screening was hosted by CARE, the Atlanta-based humanitarian nonprofit, and held at the Landmark Midtown Art Cinema. Joining CARE CEO Helene Gayle and Girl Rising producer Martha Adams on stage after the screening, Borders said: “I just had a religious experience. I’ve been baptized … I had a range of emotions watching this. I went from being sad to being inspired to asking myself, ‘What the hell am I not doing?’ We’re dealing with 20 to 25-percent poverty rate right here in Atlanta. Anywhere we see poverty, we see broken homes and we see women raising the children.”

As the nine diverse girls in the doc fight for the right to attend school, the film reports that 60 million girls across the globe are currently not in school and that 80 percent of all human trafficking victims worldwide are girls. Explained Adams: “Some people have asked us, ‘Why did you choose education as the focal point of the film?’ I hope the film helps to explain why. The correlation between girls receiving an education and the boast to the global economy is apparent.”

The screening was a must-see for Captain Planet Foundation chair Laura Turner Seydel who sat a few feet from her brother, Rhett Turner, who traveled the world to direct the evening’s opening short, Second Chances: Releasing the Power of Girls, chronicling CARE’s global work.

Borders explained Girl Rising goes to the heart of the Coca-Cola Foundation’s three global priorities of “Water, women, and well-being.” Reflecting on her sixth day as a Coke vice-president (her business cards are still being printed), she beamed and said, “Both my maternal grandparents worked for Coca-Cola. I drank Coke before I drank milk! This is a dream come true for me.”

To help the grassroots outreach of the film, audience members were asked to organize community screenings of the doc to shows in schools, community centers, and neighborhoods. For more information about how to host a screening of Girl Rising, go to the official film website.