Thirty minutes south of the Atlanta airport off Interstate 75, where the sprawling industrial parks give way to rolling farmland and horse pastures, down a dirt road and way back in the hilly woods, Grant Henry is captaining a four-wheel-drive Kubota he’s nicknamed “Little Baby Jesus,” barreling through underbrush and yipping like some crazed, unstoppable beast. As he passes over, tiny pines spring up like stepped-on rakes, whacking Henry and his passenger. “You can go anywhere with this,” Henry shouts in his Florida lilt, wearing a baseball cap stitched with “PRAY” across the front, as always. “You get all scratched up, but that’s part of the fun!”

Part of a Kubota fleet that includes a new tractor and bush-hog mower, this beefier, angrier version of a golf cart is Henry’s tool for carving walking trails throughout the bucolic 44 acres, four miles from downtown Griffin, that he bought last September. Rural Spalding County isn’t the first place you’d expect to find a man who sometimes goes by “Sister Louisa,” and who has become synonymous with Edgewood Avenue nightlife while living in increasingly extravagant condos. In past lives, the 61-year-old grandfather was a church deacon, real estate agent, antiques dealer, popular bartender, and peddler of wacky religious art, before striking gold with his irreverent Old Fourth Ward bar Church (full name: Sister Louisa’s Church of the Living Room and Ping Pong Emporium) seven years ago. It’s since spawned a retail offshoot, Church Murch, down the street and a sister bar in Athens. Now, Henry feels summoned to this former Girl Scouts campground for his next venture: an adult retreat called Sister Louisa’s Sanctuary.

“At night, it’s so pitch black and quiet here, and you see the stars,” says Henry, leading a tour. “It’s the antithesis of Church—of everything in the city. I just crave coming down here. I think I’m addicted to the silence, the peacefulness, the trees. People need this.”

Growing up in Florida, Henry attended summer camps for a decade, beginning at age 12, and worked as a camp counselor. A fellow counselor from that era recently reached out to him via Facebook; as they caught up in Atlanta, Henry’s interest in the camp experience was rekindled. He nearly struck a deal for a much larger, pricier campground in the mountains near Helen but ultimately balked. Another Facebook post by a real estate agent pal led Henry to Spalding County last summer; the Girl Scouts had donated the former camp to Hampden Sydney College in Virginia, which was selling it sight unseen. After a quick look at the property’s rolling terrain, pond with a dock, granite outcrops the size of elephants, manicured little meadow, and 13 structures (including six rundown cabins and a lodge), Henry bought the whole spread for what a studio condo costs in Cabbagetown.

Named Camp Cecil Jackson for the man who donated the land to the Girl Scouts, the 1970s campsite had been abandoned for four years, but Henry says none of the structures required demolition. He initially planned to use the property as a family getaway, a rural wonderland for his two city-raised grandsons. But he was overcome with a desire to share this “patch of heaven,” which is about twice the size of Centennial Olympic Park and home to foxes, turkeys, and a kingfisher. Peacocks meander over from a neighboring farm.

Plans are still tentative, but Henry envisions Sister Louisa’s Sanctuary being a destination for weddings, receptions, yoga groups, writers’ retreats, corporate outings. He’s thought about adding a bed and breakfast. There are no plans for programming; rather, the campground will function as the framework and backdrop for other people’s happenings, and Henry is working with the City of Griffin to obtain a new agricultural/tourism zoning classification soon to make that possible. Rates haven’t been determined, but he hopes to launch a Sanctuary website and start accepting bookings by May.

“There’s only a dirt road, so we’re never going to have a Grateful Dead show, or an art show for 20,000 people out here,” he says. “It’s always going to be contained. We’re going to be respectful.”

Along with new walking trails, the camp has buildings with onsite showers, pavilions for wood-fire cooking, a dishwasher, and an icemaker—so it’s not exactly roughing it. Construction is underway to gut and reconfigure six existing cabins that each sleep six, which Henry envisions as being like simplified tiny homes with bunkbeds, air conditioning, and heat. He was consulting with contractors during a recent visit to remodel the existing lodge near the entrance, blowing out walls and expanding decks.

The lodge overlooks a steep hill where Henry plans to carve an amphitheater; that slopes down to the pond, where he’s planning a stage over the water for music performances and weddings. Farther into the water, expect a floating trampoline for campers. Meanwhile, overhead, Henry is consulting with pros (and insurance companies) about running a zip line between two hills that would soar over the water. Elsewhere, expect treehouses for rent, possibly hanging tents, and maybe a swimming pool eventually. Profits from his other businesses are funding the work for now, although Henry is in discussions with banks for a loan that would accelerate construction.

Back in the woods, standing in a fern bank beside a creek he helped unclog by hand, Henry stops for a moment to consider his latest unexpected—if not madcap—business plan.

“For me, the last years of my life, it’s just circling back,” he said. “With Church, I was going back to my seminary days. But this reaches back even further.” 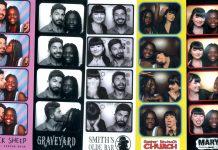 Move over, Instagram: How 10 Atlanta photo booths stack up