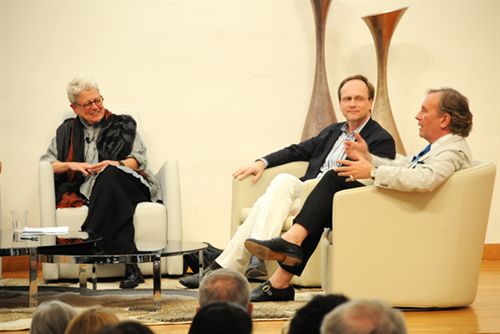 Last night I talked with some of Atlanta’s leading experts on contemporary art, design, and architecture. During our “Atlanta Embraces Modernism” panel discussion, they weighed in on whether the city reflects a modern spirit. Director Michael Shapiro reported the strong public reception of the High’s recent collaboration with the Museum of Modern Art, Picasso to Warhol. Cathy Fox, executive director of ArtsATL, talked about the recent groundswell of young, avant-garde arts groups. Renowned interior designer John Oetgen, the only native Atlantan of the group, pointed out that though many Atlantans are embracing a modern aesthetic, they still want some element of “nostalgia.” Doug Henderson, owner of Switch Modern, echoed Oetgen’s observation, noting that Atlantans haven’t really responded to the cutting edge of modern design. Merrill Elam, whose modern architecture has won major national awards, has not always found as much support in her hometown.
Whether Atlanta will ever fully embrace a modernist attitude, everyone agreed the city is evolving. The recent upswing in urban living, new technologies and materials, and economic difficulties have pushed Atlantans in new directions. The interesting question is where do we go from here? As Shapiro noted, Atlanta needs a new generation of leaders to keep up its momentum and maintain its standing as an ambitious, aspirational city.
Photographs by Caroline C. Kilgore
>> View a complete photo gallery of the event