Home Eldredge ATL Hizzoner’s hair: Kasim Reed’s barber has been there from Afro to Caesar

Before he headed to the Boisfeuillet Jones Atlanta Civic Center to begin his second term Monday, Atlanta mayor Kasim Reed paid an early morning visit to Rick’s Barber & Beauty to get his ears adjusted. Owner Rick Walker doesn’t normally work on Mondays but he opened up his shop on Campbellton Road and Ben Hill early to accommodate one of his oldest customers. It’s become a tradition, after all. Four years ago, Reed paid Walker a visit before taking the oath of office to become Atlanta’s 59th mayor. “We joked that it was an election-winning haircut,” recalls Walker. But four years ago, Reed didn’t have a Facebook page with 26,476 followers. After Reed posted about his cut Monday, Walker’s quiet day off quickly became a memory.

“The thing went viral and people kept calling and showing up so I figured, what the hell, I might as well stay,” Walker told Atlanta magazine late Monday after the last freshly clipped head exited his shop. “I ended up doing 15, 16 heads today. I was here all by myself. We have 17 chairs but my other barbers are still out of town.”

Aside from Reed’s staff at city hall, Walker may have the mayor’s ear more routinely than practically anyone else in Atlanta. For the better part of two decades, from a post-law school Afro to his current conservative Caesar, Walker has been cutting Reed’s hair. The mayor has been a customer since the Clinton administration when Walker was opening his first shop (he now operates seven Rick’s Barber & Beauty locations around the city) here. Back then, the transplant from Connecticut was hustling to find new customers and make a name for himself. “My mother bought me my first pair of clippers for Christmas when I was 13 years old,” Walker remembers. “She sewed. Mom was always making us pajamas and stuff. I used to take her scissors and trim up my hair. Whenever she pulled her scissors out to cut material, all these little hairs would fall out all over her material. My hair. That’s how it started.”

As he built a clientele at Rick’s, Walker offered a free cut to Reed’s old elementary school pal Robert McGee. “He ended up liking what I did so much he paid me for it,” says Walker. “Then he went around bragging that this barber from Connecticut can give a real tight fade. At the time, his friend Kasim Reed was just coming out of [Howard University School of Law] and he ended up coming to see me. And he’s been coming ever since.”

Like most of us, Reed’s hairstyles have evolved over the decades. “In the early days, he got a nice round, tapered Afro, you know, with the sides and the back tapered,” explains Walker. “Now, that was a bit of a tougher haircut to do. You had to leave more hair on top and it had to be perfect in order to win him over. I’ve always spent about 45 minutes to an hour with the mayor, even before he was an elected official. As time progressed and he became a state representative, a state senator and then the mayor, the cut naturally got more conservative. The hair went down, and he started looking like a politician.”

Depending on hizzoner’s schedule, Walker says the frequency of Reed’s haircuts can vary from weekly to every two days. “It really depends on how he’s feeling,” he says. “The Mayor’s Masked Ball? That day. Election Day? Same thing. He’s the mayor. A lot of times he’ll have someone call in advance but he’ll also just show up in the shop. He’ll walk in on a Saturday and we’re all shocked. Here’s what’s interesting. Everybody in the place always wants to give the mayor his place in the chair. But he’s always patient. He waits his turn. He sits there and talks with folks about whatever we’re talking about.”

And Reed’s style these days? “It’s a low Caesar, even all over,” says Walker. “He’s probably had that style for at least six years. And he is not shy at all about letting you know if he’s not liking what you’re doing. He takes his haircut very particularly.”

Walker gets an up close view of how Reed’s chosen profession can age you, too. “There’s a major transition going on right now with the gray,” Walker reports, laughing. “It’s starting to take its place. I can see the stresses of his job down there around the taper of his cut. It’s definitely showing up these days.” 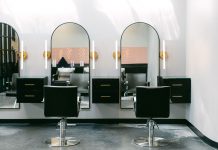