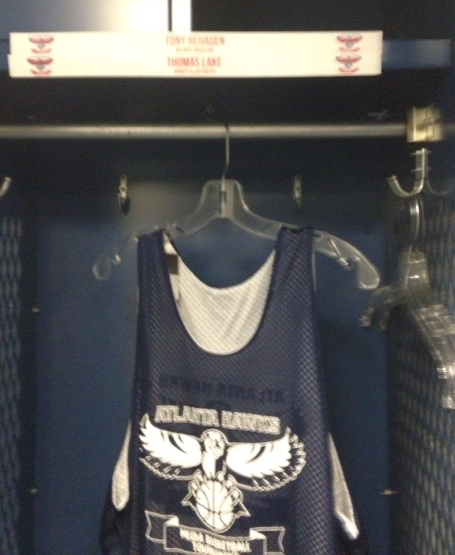 I managed to live in Indiana for more than six years and never touch a basketball. That’s not a boast, just evidence of how scarred I still am from wasting all those Friday nights on the bench watching the other six members of the St. Elizabeth Junior High team rotate in and out of the game.

Sometimes Coach Christopher would ask me if I wanted to go in. More than once I declined. After all, I wanted us to win.

These long repressed memories were awakened when I was invited to take part in this week’s Atlanta Hawks Media Basketball Tournament, which divides Atlanta’s photographers, producers, talking heads, reporters, and DJs into five-person, co-ed teams that face off in a single-elimination tournament. The event is about networking, both with the Hawks marketing and PR folks and with each other. We also get to dress out in NBA locker rooms and play on the NBA floor at Philips Arena—living out our long-abandoned (or in my case, stillborn) dreams of being professional athletes. No one cares about actually winning, I thought. I mean, we’ve all grown up. Right?

Physically, however, I have not grown an inch since those days at St. Elizabeth, still five-foot, six-inches. At age twelve, that height qualified me to be trained in the frontcourt arts of center and forward. At age thirty-four, it barely qualifies me for an adult admission. My teammates were local beer blogger Dennis Malcolm Byron (aka Ale Sharpton), Power 96.1 afternoon DJ Sonic, Sports Illustrated writer (and former Atlanta magazine staffer) Thomas Lake, and a ringer, a video production guy with the Hawks. All four were taller and more athletic-looking. So when it came time to decide which of us would sit out first in the four-on-four action, my first step toward the sidelines proved as quick as ever. When the Hawks video guy nodded uncertainly toward me as if to ask, “Are you sure?” I waved him off. After all, I wanted us to win.

Pure genius. The Hawks video guy was our best player, scoring our first points against a quick-shooting and hard-rebounding foe. The others on my squad didn’t falter, hustling for loose balls, driving hard to the paint, and taking fouls, keeping us close. I subbed in long enough to catch a pass, which I quickly turned over; post up for a screen that wasn’t used; pause the action running after my wedding ring that rolled across the hardwood; and disrupt an opponent’s jump shot with my wild lack of coordination. Then I sat back down and watched the Hawks video guy drain an outside shot worth two points to tie the game as time expired. Genius.

We ended up losing on a sudden-death free throw. We shook hands and went back to the locker room. My button-down and undershirt were sweatier from the mile walk back to the office from Philips than my free Hawks practice jersey got on the court. And yet I felt I had done my part to contribute to a strong showing for my team.