Voter roll purges, long lines at some precincts, late results. Will the Fulton County and state officials who oversee voter registration and the polls redeem themselves on November 3?

Okay, first off: Why is Fulton always late returning its results?
Fulton often doesn’t learn the winners of races until well after midnight, long after other counties have counted ballots, and the June primary was no different. Blame it on Fulton’s size—75 miles from north to south—and the task of serving a total of 787,000 voters, says Richard Barron, the county’s elections director. After poll workers break down hundreds of polling locations, they deliver cards with results to five “check-in” centers located around Fulton. Cards then are driven to the election division headquarters to be counted. In June, faulty machines and COVID-19 resulted in understaffed polls, thus the long lines—particularly in predominantly Black areas.

How will November 3 be different?
Barron says the failure of thousands of voters this summer to receive the mail-in absentee ballot they requested—he blames a convoluted email submission process and workers contracting COVID-19—has been addressed thanks to help from a $6.3 million grant from the Center for Tech and Civic Life, a Chicago-based nonprofit. By late September, his team had already processed more than 170,000 applications. Barron hopes mail-in ballots and early votes will make up 80 percent of the vote, which should help control lines on Election Day. (If you didn’t mail your absentee ballot in time, bring it to one of the 20 secure dropboxes that county election officials have placed around Fulton.) The county also bought two mobile-voting buses for $700,000 with nine voting stations. Eight hundred additional poll workers will be at more than 250 polling places.

And if I didn’t receive my absentee ballot?
Check your MyVoterPage online to find your polling place. (Poll locations have changed for roughly 170,000 Fulton voters.) Signs will indicate where you can cancel that ballot from the system and vote on site.

What role does Secretary of State Brad Raffensperger play?
Counties manage elections, but the secretary of state maintains voter rolls, oversees the election process, and certifies the results. Last year, Raffensperger removed roughly 310,000 voters from the rolls who had moved, died, or hadn’t cast a vote in recent elections. FairFight Action, the voter advocacy group organized by Stacey Abrams, responded with a federal lawsuit. A recent investigation by the Palast Investigative Fund found nearly 200,000 of those voters were still eligible to vote. (The lawsuit prompted the state last year to add 22,000 names back to the rolls.) He also signed off on new electronic voting machines, which are opposed by some fair-elections advocates like Marilyn Marks. She has sued the state to instead use handmarked paper ballots, which she calls “the gold standard.”

How can I be sure my vote gets counted?
Marks tells people, if they’re comfortable doing so during the pandemic, to request a mail-in absentee ballot and drop it off at a secure dropbox. Barron seems confident the process will run smoothly. Fingers crossed. 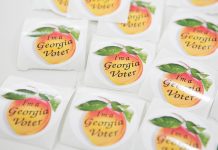