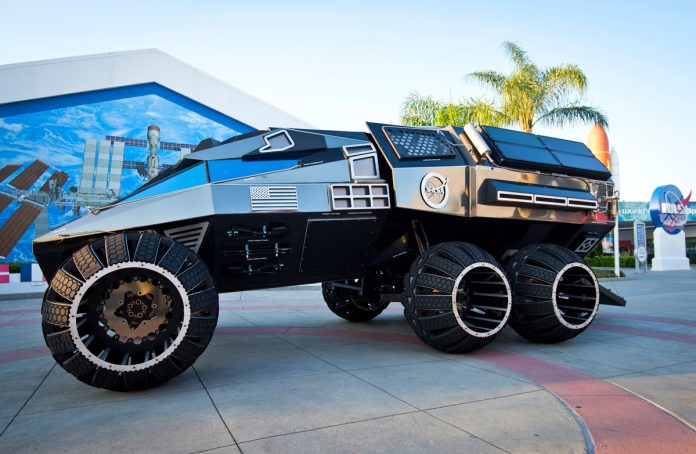 It’s not street legal. If it tried, it could probably only reach 30 miles per hour. And unfortunately it doesn’t have any cup holders. But this concept vehicle has a higher calling.

As a part of the Kennedy Space Center’s Summer of Mars tour, a concept design for the Mars rover is on display at SunTrust Park. The rover will be available for anyone to see on July 14 and 15 from 4-6 p.m. and July 16 from 10 a.m.-2 p.m., which is just before each day’s Atlanta Braves game.

And boy is it something to behold. Weighing in at 5,500 pounds, standing at 10.5 feet tall (with each wheel being 4 feet tall alone), and stretching nearly 24 feet long—you can’t argue with one child who said this thing looks like the Batmobile. One passerby involuntarily shouted an expletive just at the sight of it.

This rover hasn’t traversed the red planet, nor will it ever touch its desolate lands. It’s more of a concept than a prototype. “It’s meant to be an inspiration for future space explorers,” says Rebecca Shireman, the assistant public relations manager at Kennedy Space Center Visitor Complex. “It’s estimated that the person that will first step foot on Mars has already been born—perhaps is in elementary school—so we hope that child will see the rover, be inspired, and become an astronaut.”

The Florida space education complex got the idea for creating a concept Mars rover based on the popularity of the lunar rover. As an attempt to generate more interest in space exploration and increase knowledge on the topic, the Kennedy Space Center Visitor Complex partnered with the Parker Brothers, a Cape Canaveral-based group that makes custom concept vehicles, and consulted with NASA astronauts to create the design.

After a year of work, the group completed the fully-functioning, all-electric vehicle. According to Jon McBride, a former astronaut who spent nine days orbiting Earth and assisted on the rover’s design, the vehicle handles pretty well when driving. But his focus wasn’t so much on smooth driving as it was on the concept’s functionality.

He made sure the vehicle had a minimal weight but a maximum structure. Each wheel has an independent suspension system and treads designed for kicking out sand, soil, and rocks when exploring the planet’s surface. The wheels are also made of aluminum, titanium, and light rubber to reduce weight. Run off solar power, the rover even splits into two units—a scouting vehicle in the front and a mobile laboratory in the back—so that astronauts inside the Mars rover could test materials while others ventured for more samples. Because Mars has low gravity in comparison to Earth, the rover would have a cruising speed of roughly 2 to 4 miles per hour and would top out at 5 to 6 miles per hour.

Besides functionality, the rover wouldn’t be a poor choice for luxury. The padded seats are comfortable and allow room for space explorers to stretch their legs and lean back. No cup holders, but the vehicle does feature a push start ignition switch (which, sadly, when pushed told me I actually needed a key to start the rover), air conditioning, and AM, FM, and XM radio.

The Mars rover concept comes at a time when NASA is aggressively pushing human exploration of the red planet. In 2015, with the help of Curiosity rover, NASA found evidence confirming that there is flowing liquid water on Mars—possibly hinting at an environment that’s hospitable for life. A behavioral study conducted on a volcano in Hawaii and funded by NASA is being used to determine how a group of six people would live in isolation in conditions similar to those on Mars. Heck, the Space Administration even released an outline of its quest to send humans to Mars by the 2030s.

The talk of traveling to the red planet—even by those working on the concept Mars rover—has no mention of doubt. “It’s going to happen,” Shireman says. “It’s probable, not just a possibility.”

The Mars rover concept vehicle will stick around in Atlanta until Sunday, when it takes off to explore Washington DC.