Home News & Opinion Transportation I’m not a pilot, but I flew the Delta Flight Museum’s 737...

“Ever roll a 737?” That was the question sim-operator Paul Talbott asked me before we recreated the maneuver used by test pilot Alvin “Tex” Johnston to demonstrate to investors the capabilities of the Boeing Dash-80 (the plane that would go on to be the Boeing 707) on August 7, 1955. With a hard turn of the yoke to the left, the cockpit rolled, the horizon flipped, and our 737 defied everything you thought a commercial airliner could do. I paraphrased Johnston’s reasoning for performing the roll back in the fifties: “I’m selling airplanes!”

Of course we weren’t actually in the air. Talbott and I were decisively bolted to the ground, hydraulically suspended no more than 15 feet up in the Delta Flight Museum’s 737-200 flight simulator, which according to Delta is only full-motion flight simulator in the U.S. that’s open to the public. Though the Wild Blue Yonder was firmly out-of-reach, the museum’s sim compensated wonderfully—every turbulent bump and bone-chilling thud; every change in pitch, yaw, and roll were rendered flawlessly within the machine. Inside was a perfect recreation of the aircraft’s cockpit—all the buttons, toggles, and dials gave way to 180-degrees of projection-mapped terrain and sky into which our aircraft could be loaded. Though the polygon count was akin to a Nintendo 64 game, it was enough to maintain realism. From the pilots’ chairs, it was easy to suspend disbelief. I wasn’t operating a sim—I was at the helm of an commercial jet.

I have never flown an actual plane before, but, as a child of the late 1990s, I have dabbled in Microsoft Flight Simulator, which taught me the uttermost basics: throttle, yoke, flaps, how to read key instruments. If you were to put me in a plane, start the engines, and show me were the parking brake is, I could probably get the plane in the air and keep it there until we ran out of fuel. But that’s about it. Don’t ask me to follow procedure; don’t ask me to tune to the proper frequencies for air traffic control. I might be able to find the radio, but throw weather or mechanical complications at me and I’m done for.

Talbott queued us up at home, on Hartsfield-Jackson Atlanta International Airport’s runway 9L, just to the south of the concourses. He gave me and my first officer (up to four people can go in the simulator at a time) a quick run down on when to pull up, how to steer, and most importantly, how not to cause the airplane to flip over and crash. On the ground, the rudder pedals do all the steering. Instinctively you want to turn the yoke to right or left, in the same way you’d drive a car. On an airplane, this triggers the ailerons, rolling the aircraft, causing your wings to hit the ground. Do that at 100 miles-per-hour on the runway and you’re going to have a bad time. We throttled up to 130 miles-per-hour, then lifted into the air.

What struck me the most was the weight of the yoke. You had to pull on this thing. At the same time, the mechanism was delicately sensitive—even the smallest movement would trigger big changes throughout the plane. This balance of power and precision was lost on my novice approach, and all too often as we ascended, I found myself overcorrecting up, down, and side-to-side. Talbott gave me a quick run down on how to read the navigation he had plugged in. As I struggled with the controls, I had an indicator to follow. We climbed and banked, following a normal route out of Hartsfield-Jackson.

What goes up, inevitably, must come down. Talbott punched in some data into to the simulator’s computer and suddenly we were teleported back near the airport—on final approach into Atlanta. As I mentioned earlier, I think I can get a plane into the air. I never really got the landing part down. I even had training wheels—the throttle and braking were set to automatic, the flaps were already in the right position for landing, and we were lined up. All I had to do was keep the plane steady, aimed at the runway, follow the indicator, and peg the target. The next two minutes were absolutely nerve-racking. With every moment, the ground was getting closer and closer, our speed was more apparent, and the runway was veering to the left. I was wrestling with the yoke to position the 737 somewhat near the runway. I was doing so poorly I half-expected the late Leslie Nielsen to barge into the cockpit, firmly stating, “I just want to tell you, good luck. We’re all counting on you.”

I was close now. On target, but a bit short, coming in hot. Talbott told me to pull up. He grabbed the control to help, and we climbed, barely missing the grass. The simulator groaned with a tremendous thud, but we were on the runway. After rolling to a stop, I had to ask, “Did we crash?”

We had not. According to the readout of our landing, we had hit the runway perfectly, thanks to his help toward the end. There would be two more landing attempts that afternoon. In San Diego, if I came in too low I’d hit a parking garage. Too high and we’d end up in the Pacific Ocean. By this time, I had gotten the hang of landing. Enough at least that all but the tallest of SUV’s would have been safe on the garage’s top level. The other attempt would be at Chicago-O’Hare—with zero visibility.

Talbott instructed me to rely on my instruments. My co-pilot would call out altitude and let me know when we were through the clouds, less than 1000 feet in the air. When you can’t see anything, it’s hard to keep straight which way you’re going. A turn feels like you’re moving forward, up can feel like down, and nothing seems natural. If you’re not relying on the instruments, you’re not going to make it very far. When I heard we had visual confirmation of the runway, we were right where we should have been. I was just too low. A quick pull of the yoke wouldn’t save me this time. We fell short, crashing into the grass right before the runway.

The rest of my time in the 737 sim was spent cruising. We flew around downtown Chicago’s simulated skyscrapers, New York City at night, and performed the rolls that left me laughing, much to my more timid co-pilot’s chagrin. Talbott’s final demonstration was one that should help put those not fond of flying at ease—the plane’s auto-landing feature. Bookending our first take off, we were on final approach to Hartsfield-Jackson. With the press of a few buttons, the plane flew itself. We rose, fell, pitched and rolled, coming right toward the runway. The plane hit right on the money, and brought itself to a stop without a single further input from a living soul.

I learned that when the chips are down, when the pilot’s been poisoned by the fish and the flight attendant sheepishly asks if anyone on board knows how to fly a plane, I am not your guy. If anything, the autopilot is. Although these machines are incredibly easy to operate, they’re incredibly difficult to control. It takes a smart person, capable of monitoring 50 different things at once and executing flawless actions without hesitation to perform the complicated task of flying an airplane and returning it safely to the ground. At the same time, it’s all about training. Talbott told us about one of his regulars—a 12-year-old boy with over 30 hours of simulated flight time to his name. On his last visit, he had asked Talbott to throw an engine failure his way. In my instance, I was the engine failure. Nevertheless, the opportunity to fly (and inadvertently crash) a commercial airliner was one I couldn’t pass up. Talbott’s guidance made sure we were in the air more than on the ground. “I’m just here to make sure you have fun,” he told us. We did.

Want to try it yourself? You can book an hour-long simulator session Thursdays through Tuesdays at the Delta Flight Museum for $425.

Want to learn more about the museum? It’s one of our 50 Best Things to Do in Atlanta. 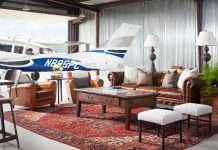 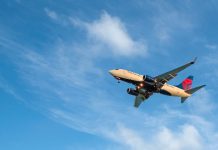 Plane-watch at the world’s busiest airport 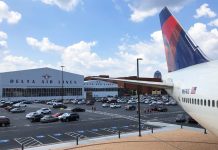