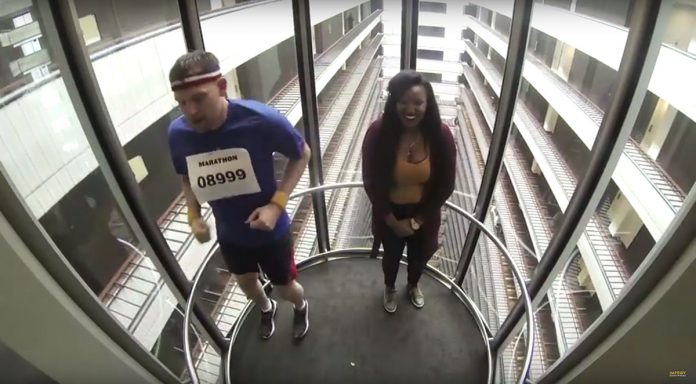 The towering atrium of downtown’s Marriott Marquis is arguably one of Atlanta’s great treasures. Its swooping curves have been featured in what feels like a thousand movies at this point, and the glass elevator even occasionally appears as a Dragon Con cosplay outfit. Now the elevator has a new claim to fame—as the star of an Improv Everywhere video.

The comedy troupe is a major YouTube star and is best known for its annual No Pants Subway Ride in New York City, which first launched in 2002. They hold their Candid Camera–style pranks in public places across the country, and for the Atlanta “mission,” they put out a call on Facebook asking for local volunteers to serve as cheering marathon fans. In the video, a woman steps on the elevator from the 47th floor and is surprised when two runners wearing race bibs step on, out of breath and jogging in place. When she arrives at the bottom, the doors open to reveal a finish line and a crowd of spectators. The runners feign cramps and collapse, motioning for the woman to “win the race.” She’s rewarded with a water bottle, a space blanket, and a faux interview, and the prank repeats with other random hotel guests.

Improv Everywhere’s website notes that the mission is the first elevator prank they’ve ever pulled off, despite the fact that the group has been around for 15 years. So it’s pretty cool that they picked our own Marriott Marquis for this first. But remember, this elevator bank has been in the Hunger Games. It’s in the new Spider-Man movie. This is just another slot on this diva’s resume.

Grant Park Coffeehouse is coming back to the neighborhood