Home News & Opinion Politics Is there a plausible scenario leading to a Newt comeback?

Unless every poll is wrong, today Newt Gingrich is going to win Georgia . . .  and nothing else.

Just because he isn’t winning (or #winning) doesn’t mean Newt is inconsequential. By fighting on, Gingrich is helping tip the GOP nomination to Romney by limiting Rick Santorum’s ability to consolidate the GOP’s large anti-Romney contingent. Santorum likely would have won Michigan if Gingrich had dropped out and endorsed him.

I’m not suggesting Gingrich is in cahoots with Romney to thwart Santorum. If that were the case, I expect Newt wouldn’t be going on TV calling Romney dishonest. Instead, I think Newt is holding out hope for yet another big GOP voter swing; a swing that will again propel him to the top of the anti-Romney heap.

I don’t see that happening though. Today’s two barometer states for the GOP are Ohio and Tennessee. In both states, it’s Santorum, not Gingrich, who has a decent chance at beating Romney. If Santorum wins  Ohio and Tennessee, Romney will indeed suffer another serious wound. But under what plausible scenario does  Gingrich benefit from that? None that I can think of. If Santorum wins Ohio and/or Tennessee today, nobody’s going to say, “Romney is weak. Let’s all now vote for Newt.” 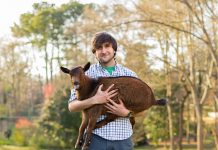