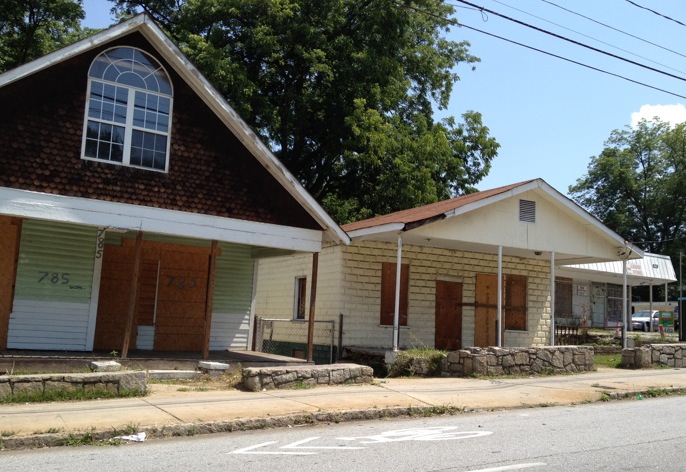 There are still votes to be tallied, meetings to be held, and contracts to be signed, but it appears the mayor, Arthur Blank, and everyone else concerned have wrangled a deal to keep the Falcons in the city, give them the fancy $1 billion stadium they want, and reduce the amount the rest of us Atlanta hotel guests chip in.

Blank and City Hall also promised funds to help Vine City, English Avenue, and Castleberry Hill, the communities that have been affected by the old Georgia Dome and will be further disrupted by a new stadium’s construction.

The first part of the deal sounds great. The Falcons, Blank, and the NFL cover more costs than originally proposed and we’ll also get some new roads and sidewalks on the west side of town. Tourists will be happy. Maybe we’ll snag a Super Bowl, or at least MLS games. Everyone wins. Right?

Maybe not. If details are still a little fuzzy when it comes to the $1 billion stadium financing, they’re downright obscure on exactly how “the community” will benefit and even exactly how much it’s getting—hence that asterisk in the headline. I’ve been told $45 million; with Blank’s family foundation giving $15 million and Invest Atlanta putting in $15 million from existing funds in the Westside TAD and offering another $15 million in new tax credits.

“It’s a good start that there’s a recognition that there should be community enhancement measures,” says Greg Hawthorne, executive director of the Vine City Health and Housing Ministry. “But it really needs to translate into what the community needs.” At the top on that list: “Jobs,” says Hawthorne. “Not just minimum wage jobs, but living wage jobs and an intentional focus on developing a workforce.”

According to Census data for 30314, the ZIP code that includes Vine City, less than 40 percent of residents are employed and more than 50 percent of families with children live below the poverty level while 37 percent of the area’s housing is vacant.

When it comes to building stuff, Atlanta’s got a great history of public-private partnership. Civic leaders come up with an idea, City Hall irons out the political wrinkles, and then Coke, Delta, the Home Depot, and other hometown companies contribute funding. It’s how Atlanta won the Braves and the Olympics.

On the other hand, our track record of taking care of people in the process of building things—large venues in particular—is lousy.

In the early 1960s, Atlanta Stadium was built on the site of one razed neighborhood, Washington-Rawson, and encroached into three others—Summerhill, Mechanicsville, and Peoplestown. Later that decade, the Civic Center was erected on the former site of the Buttermilk Bottom neighborhood. In the 1970s, more houses and businesses were cleared to make way for the Georgia World Congress Center. In early 1990s, the Georgia Dome displaced at least six churches, and dozens of their congregants’ homes in Vine City and English Avenue. In the mid-1990s, the Olympic stadium was erected in Summerhill—over the opposition of some residents—and later the original 1960s stadium was demolished and replaced by acres of asphalt.

To say the communities near big venues suffer is an understatement. Georgia Avenue in Summerhill, once a thriving commercial district, is nothing but boarded storefronts.

Vine City struggled even before the GWCC or Dome were built; back in the 1960s, Martin Luther King Jr. both protested slum conditions in the neighborhood and lived there himself. King’s home was (and is; the family still owns it) on Sunset Avenue, which runs from the Atlanta University Center through Vine City and the adjoining neighborhood, English Avenue, before dead-ending at North Avenue. If you’ve never driven the full stretch of Sunset, you should. It provides an instant snapshot of how impoverished Vine City and English Avenue truly are. The block of neat-and-tidy bungalows and ranches near the King home quickly gives way to overgrown yards and sagging fences. By the time you cross Boone, the road narrows and is pitted with potholes and, if like me, you’re driving a Honda Civic, you’ll worry for your undercarriage and wish you had a Jeep. There are vacant lots, decaying apartment buildings, yards piled with debris. A couple of infill homes, optimistically erected last decade, are abandoned and boarded over. Scrawny dogs guard sprawling junkyards on the final block. Bleak doesn’t begin to describe it; Third-World is too cheap and easy a label but comes closer.

Gregory Washington has worked in Vine City for the past six years as youth program director for City of Refuge, a shelter/job training center. “The leaders need to not only focus on the stadium,” he says. “This is a wonderful opportunity to strengthen what’s here. But let’s prepare, not just drop a building into the community.” That preparation includes a realistic assessment of the “maze” the residents live in, he says.

“I really always wish people would ask: What does it truly take for transformation in the 30314 area?” he says and then answers his own question: “Working with young people.”

If residents of 30314 (and parts of 30318 which include English Avenue) are skeptical, it’s understandable. Back in 1991, when the Georgia Dome was under construction, then-mayor Maynard Jackson and members of City Council (among them future mayor Bill Campbell), set up shop at the corner of Magnolia and Vine to hear from residents concerned about the Dome’s impact on the neighborhood.

Back then, the Atlanta Journal-Constitution reported on plans to build homes on vacant lots and offer job training to those living in the Dome’s shadow. “This is not a sideshow,” Jackson told the newspaper. “When that Dome opens up it’s not going to be business as usual in Vine City . . . We want the sidewalks fixed and the streets properly paved to make Vine City as good as any other neighborhood.”

Almost a quarter-century later, Atlanta gets a second chance to make good on those promises.