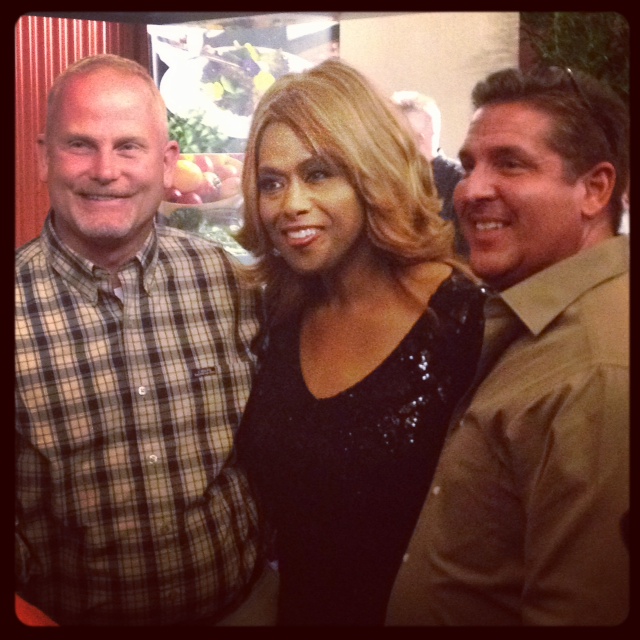 About midway through her intimate Broadway in the Garden performance Sunday night at the Atlanta Botanical Garden, Tony and Grammy winner Jennifer Holliday referenced her unique surroundings. “My dressing room is over where some cultures are growing!” the Dreamgirls icon told the capacity crowd gathered in a lavishly decored tent erected on The Great Lawn. “I don’t know what they are. I’m a Broadway girl. I kept thinking about Little Shop of Horrors back there!” The Atlanta resident donated her performance Sunday night as a joint fundraiser for Actor’s Express and the Atlanta Botanical Garden.

With only a pair of bottled waters and a carafe of a warm throat-soothing beverage to keep her company on stage, Holliday, now 52, dazzled the crowd with a set of hand-selected songs from her career and the stories behind them. She discussed meeting Broadway great Ethel Merman when she was a kid while wowing Broadway audiences nightly with her Act One showstopper And I’m Telling You I’m Not Going [“Some of the critics were comparing my moment in Dreamgirls with hers in Gypsy and she wanted me to know she disagreed.”], discovering Barbra Streisand after Dreamgirls director Michael Bennett asked her to watch Streisand’s movie musicals to learn movement tips [“I didn’t know who she was. I was 19. If Aretha Franklin didn’t sing it, I didn’t know it.”], how she kept her voice in shape doing eight performances a week for four years on Broadway in the show from 1981 to 1985 [“They wouldn’t let me drink, smoke or do drugs. I had no fun. But, I’m still alive and I can still sing!”] and her much-noted 200 pound weight loss and second career as a weight loss pitchwoman [“I am living hoooongry. Both Jennifers are really hooongry. But one of these Jennifers is getting paid to starve!”].

Holliday received two standing ovations before she even got to her show-closing signature song. Alas, while some fans were on their feet, one overzealous [and possibly over served] admirer sat down. On the floor. In heels. At the foot of the stage. And began shooting video of Holliday. Three songs into her YouTube directorial all-nighter, Holliday finally addressed the woman, asking, “Does your camera not have a flash on it? I don’t mind you all taking pictures but to record two or three songs? Come on.”

Blessedly, Atlanta Botanical Garden and Actor’s Express numbers crunchers were too tickled by the cash flow pouring in for the two nonprofits throughout the evening to mind. Actor’s Express artistic director Freddie Ashley and AE board chair Bruce Cohen teamed up to host a dinner for ten cooked by Ashley at the Vision Properties president’s Buckhead home. “I can do more than just direct a play, y’all,” Ashley told the crowd. “I can sling some damn hash.” The pair ended up auctioning off two dinners for a total of $5,000. A walk on role in next summer’s AE production of The Rocky Horror Picture Show (you get to perform in the Time Warp number, natch) went for $700 and former Decatur mayor Elizabeth Wilson strode to the stage herself to detail the Southern cuisine she’ll be whipping up for 10 guests for her auction item: fried chicken, creamed corn, three vegetables and “sweet, sweet tea.” Wilson ended up selling two dinners for a total of $4,000.

Photos by Richard L. Eldredge
Main photo: The interior of the tent on The Great Lawn.
Instagram photo: Holliday met with fans for photos at the post-show VIP reception for ABG and AE patrons.