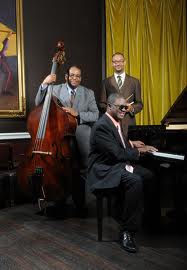 With the silencing of Churchill Ground’s Whisper Room and the wrecking ball ravaging of Dante’s Down the Hatch, it hasn’t exactly been a stellar year for Atlanta jazz fans. But now with the elimination of tolls on Georgia 400, more Atlanta listeners may be headed up to Alpharetta to check out the Velvet Note Acoustic Living Room. Especially now that the intimate club has snared internationally regarded jazz pianist Marcus Roberts for a three-night stand tonight, Saturday and Sunday. Like the Whisper Room and even Eddie’s Attic, the Velvet Note’s emphasis is on the listening experience both for the artists who gig there and the fans who congregate to see them.

The path to booking a big name like Roberts began after jazz trumpeter Marcus Printup played a pair of shows at the Velvet Note in August. Velvet Note owner Tamara Fuller got into a discussion with Printup about his greatest influences. The horn player told her without a doubt, it was Roberts who has served as his biggest mentor. Even though it was shaping up to be a busy fall for Roberts with the debut of two new albums featuring his old pal and musical co-conspirator Wynton Marsalis, Together Again: Live and Together Again: In the Studio, Fuller placed a call to Roberts’ management anyway.

“I just asked if Mr. Roberts might want to play here, not for a minute, thinking it was possible!” Fuller explains laughing. “When a musician is traditionally booked at Spivey Hall, it’s a long shot when you’re a little 40-seat club in Alpharetta. Then I was told that Mr. Roberts had heard of the Velvet Note from Mr. Printoff and others and he heard that it was the place to play in the Atlanta area and that Mr. Roberts would be happy to play here. I was amazed.”

Tickets are still available for tonight’s late show (the dinner show is sold out) while a few seats remain for both the 7:30 and 9:30 Saturday shows. Friday and Saturday’s performances will be Marcus Roberts Trio performances featuring Rodney Jordan on bass and Wynton’s little bro Jason Marsalis on drums. Fans, meanwhile, are likely to return for Sunday night’s A Private Evening with Marcus Roberts show when the pianist will perform solo.
The Velvet Note’s signature 1924 Baldwin baby grand piano, meanwhile, has been moved out for the weekend in favor of a $100,000 Grotrian grand piano, an instrument that comes complete with a tuner on call all weekend from Piano Works in Duluth.
“They brought it in just a couple of hours ago,” says Fuller. “And I’m telling you, it’s like you were raised on chuck and you just got your first bite of filet mignon. It’s just gorgeous. The tuner is here now and he will be here to tune with Mr. Roberts when he arrives for sound check as well.”

And the Velvet Note’s superstar jazz bookings won’t end with Roberts either. Thanks to the venue’s growing national word of mouth, tickets will go on sale next week for an upcoming Spring 2014 appearance by Grammy-winning vocalist Diane Schuur.

“We’re excited that people from Atlanta are coming up, especially now that it’s toll free,” says Fuller. “But believe it or not, there are just as many locals in this area who have a strong appreciation for great jazz music and who are so happy to have a place to see it and hear it live locally. There are a lot of Alpharetta, Johns Creek and Roswell residents here who appreciate great art. We’re very grateful.”

For tickets and more info, go to the Velvet Note’s official website and check out the club’s Facebook page or call 855-5-VELVET.