The Museum of Design Atlanta, the Southeast’s only museum devoted to design, recently launched 2020: The Year of Climate & Change. The initiative is unprecedented for the Midtown institution: Showing how design can mitigate and, in some cases, reverse climate change will consume the museum, including kids’ summer camps and adult workshops, for an entire year.

MODA’s executive director Laura Flusche wants visitors to leave with the sense that a solution for the climate crisis is within reach and that designers, and consumers, are crucial to the effort. “It’s not just asking them to go off into their studios and figure it out,” Flusche says. “We have to empower them. We have to ask for it and find ways to make it happen.”

And now is the time to start, she says. According to the United Nations, the world has 10 years left to prevent irreversible damage. “This seemed like a landmark year to really get serious,” Flusche says. “We’re on a tight schedule.”

Learning from Nature: The Future of Design (March 1–May 23) focuses on biomimicry, or finding design inspiration in nature. Think Japanese bullet trains streamlined like the aerodynamic beaks of kingfisher birds to reduce sonic booms, or Speedos designed to glide through water like sharkskin. Also expect energy-efficient wind turbines and fans modeled after the fins of humpback whales and even efforts to grow cement from bacteria, reducing today’s carbon-heavy concrete production processes.

Bike to the Future (June 7–September 7), a traveling exhibition from Italy, features cutting-edge bicycles (an “Aero” bike with minimal drag and another made of bamboo) and technology (sensors at stoplights that detect cyclists and hasten signal changes in the rain), while spotlighting how cities around the world are designing and altering infrastructure to encourage alternate transportation. The museum is working with Midtown Alliance and the Atlanta Regional Commission to “Atlanta-cize” the conversation, focusing broadly on bike initiatives across the region.

Full Circle: Design Without End (October 11–January 24) will focus on regenerative design—objects, systems, and buildings that go beyond LEED certifications to have positive impacts on the environment, like Georgia Tech’s self-sustaining Kendeda Building or shoes with filters in the soles designed to clean the air with each step. 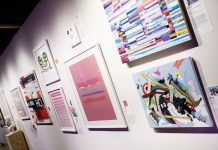 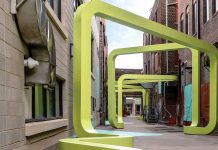