If you’ve paid attention to news out of MARTA the past several weeks, you’ve no doubt heard the phrase “transit-oriented development.” That’s urban-planner speak for the development of land surrounding transit stations. Lindbergh City Center, with its mix of residences and retail, is a prime example. MARTA has lately secured developers for massive mixed-use projects at the King Memorial and Avondale stations and solicited proposals for Edgewood/Candler Park. Seven other stations have made the working short list for similar projects.

So why is transit-oriented development (TOD) a buzzword now? Mainly it’s a money-making opportunity for MARTA, as private developers will pay long-term leases on MARTA-owned lands. And MARTA desperately needs new revenue streams. In January, MARTA brought on Amanda Rhein, a former managing director at Invest Atlanta, as senior director of transit-oriented development. We spoke with Rhein about her new job and the agency’s plans.

Describe your role with MARTA.
I oversee the office of transit-oriented development and real estate, which really has three functions: real estate, which is the management of all MARTA real estate assets; transit-oriented development; and retail and concessions. We haven’t heard a lot about retail and concessions yet. Only our first phase has rolled out, which was vending in the stations. But the next phase is really exciting. It’s going to be actual retail in select stations, so you could buy a cup of coffee, get a newspaper while you’re waiting for your train. That will be rolling out over the next year.

Which stations will get the new retail concessions?
Five Points is a big one. We have, I think, sixteen stations in total, but we haven’t shared that information with our board yet so I wouldn’t want to get in front of that.

Development projects are officially in the works for King Memorial, Decatur, and Edgewood/Candler Park. Any others?
Nothing else has been released. Internally we’re evaluating a number of options. Brookhaven is one that we expect to release within the next six to twelve months—probably sooner than that. Then we have Medical Center; we’re looking at hotel and residential. I think Lindbergh and H.E. Holmes could be within the next six to twelve months. Fort McPherson we want to wait on that until there’s more clarity regarding redevelopment of the fort.

When will construction begin on the first TOD project?
King station is ahead of the others. That developer [Walton Communities] is applying for low-income housing tax credits in this 2014 round; that means they apply in the summer and find out by the end of the year whether or not they received the award. So they should begin construction in early 2015.

Real estate development is inherently risky. Does MARTA share any of that risk?
MARTA has pretty lengthy agreements that we enter into with each developer that protect us if something goes wrong on the project. The real challenge in any project is identifying your financing sources, so that’s in my opinion the riskiest phase. If the developer isn’t able to pull together all the financing required to construct the project, we have the option to terminate the lease.

How might a community located near a TOD project benefit?
I can use King Memorial as an example. There is an underpass right now that separates the station from the TOD project. Anyone [approaching] from south of the MARTA line has to walk through this dark tunnel in order to get to the station. With this project, there will be improvements to that walkway—better lighting, better drainage, if we’re lucky some type of mural.

And having the development project right there just makes it more pedestrian-friendly. A pedestrian would much rather walk by active shops and retail, where you have eyes on the street, than a parking lot.

How does MARTA gain ridership from these developments?
We have a couple of models that we’ll utilize in order to project the potential ridership, based on the residential [units] at that project. There will certainly be more ridership that results from the retail development as well, and I think there are indirect ridership benefits that are difficult to measure. A lot of people would not use the King station right now to get to the King Center, but if, say, you can grab lunch there or coffee there and walk over to the center, then you may be more likely to do that. Just to make the stations more appealing encourages people to take the train and maybe walk a little bit further than they normally would.

How did you get into city planning?
I’ve just always been interested in urban environments and how people function. When I started at Boston College, I picked sociology because it seemed like the best fit with my interests. As I went through college I realized there was this career called urban planning, so I went straight from undergrad into grad school [at Georgia Tech]. I looked at grad schools all across the country, but Atlanta was the most interesting because it really was a laboratory for the problems that urban planners are trying to find solutions to.

That’s a positive spin on our problems!
Atlanta’s an exciting place to be in real estate in general because it’s a young city, there’s still a ton of opportunity, there’s undeveloped land. And people really love the city when they come here, so they’re enthusiastic about being part of the solution. In older cities like New York or Boston, people are really fixed in their ways and they don’t see that they can be part of the solution. 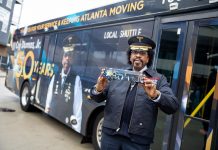