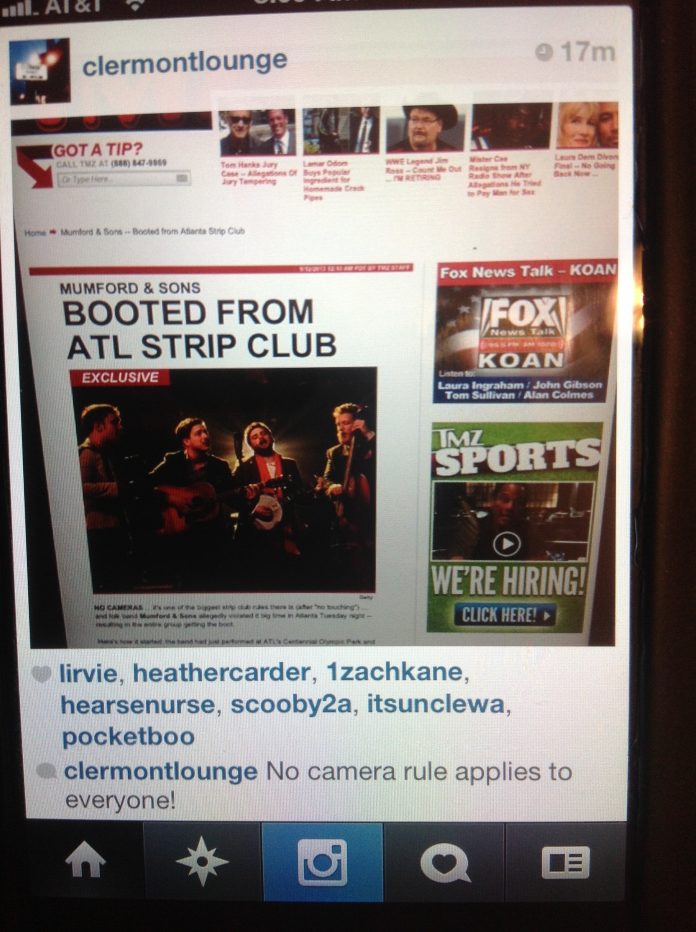 They may have performed in front of thousands of adoring fans in Centennial Olympic Park Tuesday night, but Mumford & Sons later got unceremoniously booted from Anthony Bourdain’s fave Atlanta hang out after breaking the Clermont Lounge’s cardinal rule — absolutely no photos. Complete with grainy video of the ejection, TMZ.com first broke the story online early Thursday morning. Apparently, the skirmish occurred after the band’s triumphant Instagram selfie-inducing show for fans in the downtown park and Ben Lovett and the boys boarded the Fur Bus for the Ponce de Leon Avenue club.

Since it was karaoke night at the Clermont, Lovett decided to take to the stage to perform one last concert encore. But according to club reps, when Marcus Mumford and/or Sons yanked out their cell phones to snap pictures and shoot video of the momentous occasion, they were immediately reminded of the Clermont’s strict rules posted outside and around the nightspot.

They failed to comply and were ejected. In the cellphone video footage obtained by TMZ, the hairy, harmonizing banjo pickers were still nattily attired as they were told: “Everybody out! Go, go, go!” But mostly, the video features the back of some random woman’s blue floral print dress.

On the Clermont Lounge’s Facebook page, club reps denied there was a fight (I tend to take them at their word since most Clermont Lounge door personnel resemble characters from “Sons of Anarchy” and well, let’s face it, these folkies — who may or may not be related — play mandolin and wax poetic about dustbowls).

TMZ reports that, thus far, there has been no official word from the Mumford & Sons camp about the incident. But the Clermont Lounge’s Instagram account perhaps summed it up best. On Thursday morning, the Clermont’s Instagram account featured a screen shot of the TMZ headline “Booted From ATL Strip Club” with the following comment: “No camera rule applies to everyone!” Below it, follower v6ughn added this hashtag: #dbags.