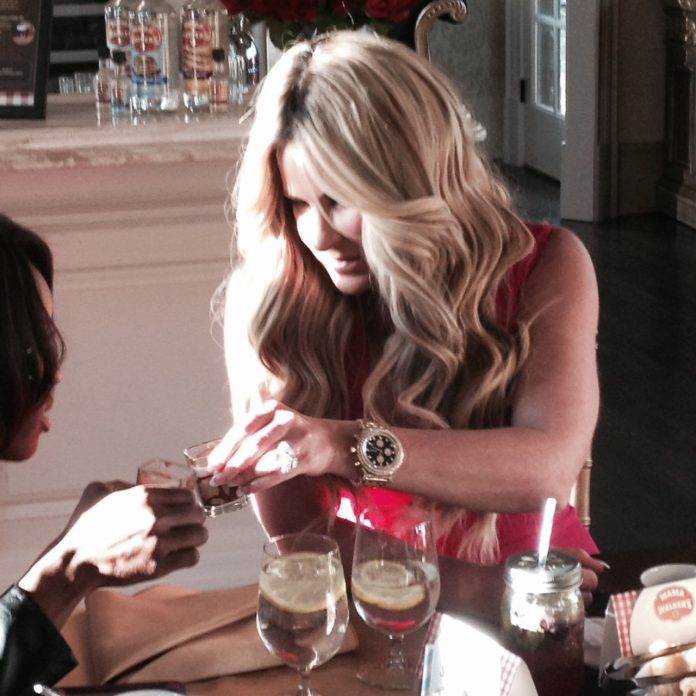 At 3:40 p.m. Tuesday, my cellphone rings. It’s my driver Bashira. The black sedan is idling outside, waiting to take me to this evening’s assignment. I’m being whisked to Bravo reality TV star Kim Zolciak Biermann and Atlanta Falcons defensive end Kroy Biermann’s Alpharetta estate to consume breakfast foods at dinnertime. And to get drunk.

The former Real Housewives of Atlanta cast member has been hired to be the celebrity spokeswoman for Mama Walker’s, a brand of breakfast-inspired liqueurs. The flavors include Blueberry Pancake, Maple Bacon, and Glazed Donut. On the label of each bottle (suggested retail value $12.99) is an oven mitt clutching a martini glass.

Outside the mammoth mansion are other sedans transporting bloggers and reporters. Zolciak Biermann’s assistant Sweetie greets us at the door and shows us downstairs where we are given our first cocktail concoction, Mama’s Sunday Brunch, a mimosa in a champagne flute made with orange juice, bubbly, and maple bacon liqueur. “This is delicious!” exclaims one blogger as I busy myself looking at the home’s artwork, which appears to consist solely of large photographs containing some combination of Kim, Kroy, and/or their children.

Every available electrical outlet in the area is occupied by a blogger’s phone in need of a fresh charge. Classical music (selected by Sweetie) is quietly piped into the room. Over-sized art books Diamonds & Pearls by Dolce & Gabbana and Gucci By Gucci rest on the coffee table as a cleavage-rich portrait of Kim gazes down from over the fireplace mantle. Chilled blueberry pancake shots are served.

Finally, the guest of honor, clad in a slinky, curve-hugging hot pink dress, appears in the flesh. “How fun is this going to be?!” she says, greeting us. “Oh my God, who doesn’t love breakfast food!” The mother of the five-month-old twins in the next room adds: “I haven’t walked in heels in three years so I’m a little slow tonight!”

Dinner is served, along with a mason jar containing a Mamasjito, a combination of crushed fresh blueberries, mint, soda water, and blueberry pancake liqueur. I glance over at the blogger’s place setting next to me. It is littered with the remnants of three different cocktails. “Those are three of the worst things I’ve ever put in my mouth,” he confides with a whisper.

The fried chicken is boneless. It goes down easy. It is followed in quick succession by a maple bacon Bloody Mary and a celebratory Boston Cream Pie shot which is 1 part glazed donut liqueur, 2 parts half and half, and a drizzle of chocolate syrup. After dinner coffee consists of a heady brew of black java and more donut-flavored booze.

One of the Mama Walker’s PR reps says brightly: “The bar is still open so feel free to order anything you like!” The blogger sitting next to me asks hopefully, “May I have a Pappy Van Winkle 15 year?”

As Kroy gives the twins their evening bath in the next room, Kim is spirited downstairs for five-minute interviews with each of us media reps. During my allotted time, I mention how skilled her husband is in baby bathing.

“He’s awesome,” she confirms. “That’s what we do every night at 7:15. He does one and I do one. I love having him home in the off-season. Of course, last season he was injured, so he was out, but because I was pregnant with the twins, it was a silver lining for me. But he is so ready to go back this year. The new stadium sounds very exciting and is so beautiful, so unbelievably beautiful.”

With all of the RHOA “haters” now armed with Instagram and Twitter feeds, Zolciak Biermann says she doesn’t really enjoy going to Falcons home games. “I don’t want to be up in a box. I want my husband to see me, I want him to see the kids. I want him to know we’re his biggest fans. I want to get as close as I can to let him know we’re there for him. I don’t mind the photos and the fans but I really just want to watch my husband play.”

As a life-long donut fan, Zolciak Biermann says Mama Walker’s appeals to her sweet tooth. “Growing up in Connecticut, we had a Dunkin Donuts we would go to every Sunday. My mom would always get me the powdered vanilla cream filled. To this day, they’re my favorite.”

As a gag, Kim bought Kroy a Bacon of the Month subscription last Christmas. The April variety, cinnamon and sugar, is still in the fridge upstairs. Every weekend in the off-season, he cooks breakfast for the household. “He does bacon, eggs, French toast, or pancakes,” she says. “He’s an incredible chef. That’s his ritual every weekend. It’s important to him that we all have breakfast together. Thank God, he can cook!”

Just as I begin to feel the effects of a maple bacon Bloody Mary, a glazed donut Boston Cream Pie, and a Blueberry Pancake shot colliding in my stomach, my driver rings. He’s outside, ready to transport me back to the city and sobriety.

Opening the door for me, I pour myself gingerly into the back seat. I notice that I am now mouth breathing. “Bashira,” I instruct. “Take me drunk. I’m home. And step on it.”