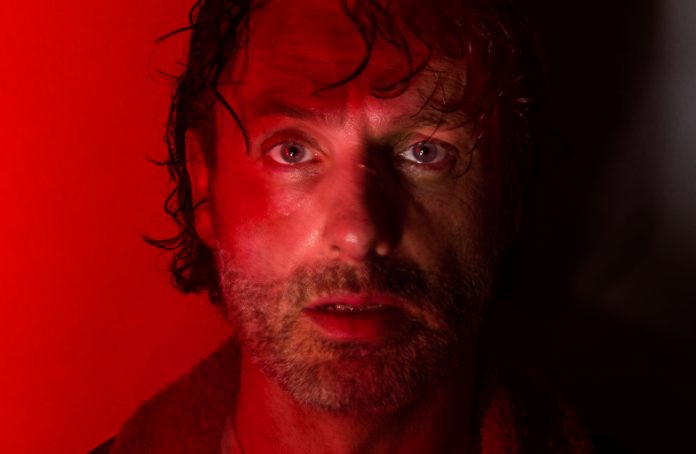 This past weekend at New York Comic Con, AMC unveiled a clip from the upcoming season 7 premiere of The Walking Dead. Obviously there was no definite clue as to which member of Rick’s posse was fatally struck down by Lucille, Negan’s barbed-wire-wrapped baseball bat, and that unknown made the clip all the more frustrating.

The three and half minute video depicts the moment just after Negan brutally murders one of Rick’s crew, evident from the sobbing and crying heard in the background. “I’m going to kill you,” a shell-shocked Rick rasps, blood swiped across his face. Negan just purses his lips and mutters “Jesus,” before asking his “right hand man” to bring him Rick’s weapon, an axe. “Having [a right hand man] is important,” he explains, “I mean, what do you have without them? A whole lot of work.”

“You have one?” Negan asks Rick, smiling. “Maybe one of these fine people still breathing? Oh, or did I . . . ” Negan swings blood-coated Lucille across his body and mimics a “clunk” sound. Shaking, Rick looks away for a moment before returning eye contact with Negan, who then grabs Rick and hauls him into the RV, slamming the door shut. The sobs from the group intensify as the camera pans down onto the grisly remains of the skull Negan bashed to smithereens.

There have been a lot of disturbing, unsettling moments in TWD, but this one is certainly up there. There is no background music, just the group’s sobs and, perhaps even more disturbing, the early morning chirping of birds. Negan smiles for nearly the entire clip. And of course, you can’t watch without the constant nagging anxiety of trying to determine which character has been murdered. Whose voices did we hear crying out? Was it Rick’s “right-hand man,” as Negan suggests, that took the fatal blow? (Does Rick even have a right hand man?) Who’s teeth are the only things that remain in the pile of human goo?

The Walking Dead won’t be back on the air until October 23, so there’s still plenty of time to fret and speculate. Let’s just hope that the identity of who died is revealed before the first commercial break. It’s the least they can do after this long, torturous wait.