Because the Republican Party targets its outreach to older voters, a lot of the young whippersnappers out there (a.k.a. people born since 1962) like to snob on the GOP for being culturally out-of-step.

This is unfair. An honest observer must concede that only one party has successfully tapped into the cultural obsession with the undead. If the GOP Presidential contest were a movie or a novel, it’d be a zombie thriller. Just when you think one of them is buried, there’s an awful screech and he comes back to life to terrorize his opponents a little more.

In Florida, Mitt Romney pitchforked Zombie Gingrich’s candidacy in the heart a mere ten days after Gingrich returned to life in South Carolina. But while Romney’s back was turned, Zombie Santorum returned to life in Colorado, Missouri, and Minnesota. Even though Santorum’s victories didn’t shift the nomination delegate count in his direction, the symbolism of the wins shifted GOP popular opinion Santorum’s way.

In the past month, Gingrich and Santorum swapped first and third positions in national polls. Santorum is now the most popular Republican nationwide, a few points ahead of Romney. Gingrich has fallen to the low teens.

The next two contests are tomorrow in Michigan and Arizona. A win for Santorum in Michigan would deal a terrible blow to Romney, and a fatal blow to Gingrich. Gingrich’s best hope for zombie reincarnation begins with a win in Georgia on March 6 (only eight days from now).

If Santorum wins Michigan, Gingrich’s shrinking lead in Georgia is likely to vanish as Georgia’s Romney-hatin’ conservatives coalesce around the strongest anti-Romney. We’ll be down to two zombies and Ron Paul. 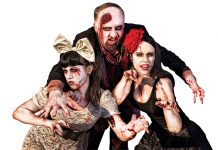