We knew that The Walking Dead has a rabid fanbase. And we presumed that our November cover face off between stars Andrew Lincoln (Rick) and Norman Reedus (Daryl) would attract the attention of said fans. But we were not quite prepared for the response that came when we posted a sneak preview online last week. People started calling and emailing the office from all over—Ireland, Japan, and Chile, for instance—asking for copies. An AMC Facebook post about the covers sent so many Dead fans to our site it crashed for a few minutes. The tweetage was insane. (Sample: @taranamayes: @AtlantaMagazine’s Reedus cover made me shiver in a good way…)

Knowing that some 10,000 TWD fans were coming to town over the weekend for the inaugural Walker Stalker convention dedicated to the show, we thought, “What the heck, let’s set up a booth. Maybe people will pick up a few magazines.”

Well. We were still unpacking boxes when a woman came up and bought ten issues at once to ship to friends overseas.

Over the next three days, editors and designers who would never venture near fantasy conventions handed out magazines while sneaking sideways glances at the guy to our left who was selling snakes and the tattoo artist across the aisle. (Really? Who gets a tattoo on impulse in the middle of a convention center?) We listened as fans raved about the cover subjects. Bemused spouses and significant others gamely pitched in.

Reedus and Lincoln autographed giant blowups of the covers which we raffled off to benefit charities of their choosing; for Reedus, Oxfam, for Lincoln, Children’s Healthcare of Atlanta. Here’s an observation: Bad boy Daryl/Reedus definitely had the most popular cover (we saw a few women kissing their issues of the magazine) while good guy Rick/Lincoln drew more charitable giving. Draw your own conclusions.

As Reedus stopped by to sign his cover blowup, a visitor lifted up her shirt to show where she had his signature turned into a tattoo.

Which kinds of summarizes our collective reaction to our foray into convention culture. 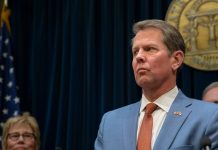 Governor Kemp has made his choice clear. What about yours? 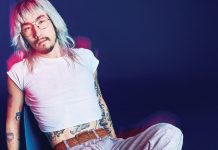