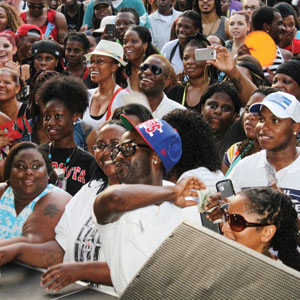 Didn’t this begin as a barbecue? It started with a small gathering in Piedmont Park. Then nightclubs started sponsoring official black pride parties. It was a time back when Lil Jon was a cook and Ludacris was a DJ at these parties. They were celebrations that defied racial lines and sexual orientation barriers.

Your sponsors include Sam’s Club and MillerCoors. What’s it like to see these mainstream brands on board? Progress is being made. It’s nice to be acknowledged as a voice in the community. And ours is a strong voice. Our people will support companies who support equality for everyone.

The event includes panel discussions. What are hot topics for 2013? Gay marriage, healthcare benefits, and who can be a beneficiary on your insurance. We have a transgender health summit. And because Atlanta is a city where there is a lot of inclusion in the church, we’ll be relying on that expertise. We’ll be tackling things like, “Yes, your choir director is gay, and that shouldn’t be a problem.”

Last year, the Pure Heat hair battle was so popular it made it into an episode of Oxygen’s Bad Girls Club. Is it returning? We’ll figure out a way to make it even better and spicier. Topping last year’s event will be a fun challenge for us!