Photograph courtesy of Our Labor of Love

Since she cofounded Atlanta-based Equally Wed in 2010, editor in chief Kirsten Ott Palladino has seen the number of states that recognize same-sex marriage more than triple. She says she has found her passion: advocacy journalism “wrapped up in pretty lace, handsome linens, and happy smiles of people in love.”

What was your motivation for starting Equally Wed? My wife, Maria, and I launched the online magazine in 2010 after facing discrimination and challenges when planning our own 2009 nuptials. We noticed the enormous lack of coverage of same-sex weddings in commercial magazines and felt betrayed—that our community’s weddings were not worth covering by mainstream media.

What can readers of Equally Wed expect to find? We publish new content daily, from real weddings to marriage equality news to tips on DIY, all with a streamlined focus on how it applies to the LGBTQ community, such as suits for women, makeup for men, dealing with homophobia in the family, and how two people of the same sex propose to each other—or don’t. We’ve also custom-built LGBTQ-centric interactive wedding-planning tools, as well as an intentionally slim marketplace of equality-minded, gay-friendly wedding professionals.

How have attitudes toward marriage equality changed since you started? When we launched Equally Wed, only five states legally recognized same-sex marriage. Now it’s seventeen. It’s been astounding to see people doing the right thing in such a widespread manner. But unfortunately that doesn’t mean that ignorance and hate aren’t thriving in every state, including ones that offer marriage equality.

Do you think attitudes have changed in Georgia? Homophobia is still rampant in Georgia, and it will take decades for it to dissipate in a truly evolved way. But . . . we’ll get there. We have to!

How does Equally Wed factor into the move for marriage equality? There are a zillion facets to this fight, but at the heart of it all is visibility: For Maria and I to feel confident holding hands in public and walking with our young children. Couples proud and brave enough to submit their wedding photos where they’ll be seen worldwide. Courageous men and women putting themselves directly in the line of fire by starting or joining lawsuits in their own states for the freedom to marry.

Marriage equality by the numbers

This story originally appeared in our June 2014 issue

UPDATE, JUNE 2014:  Since this story went to press, the number of states in which same-sex marriage is legal has risen to 19. 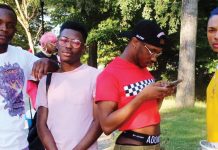