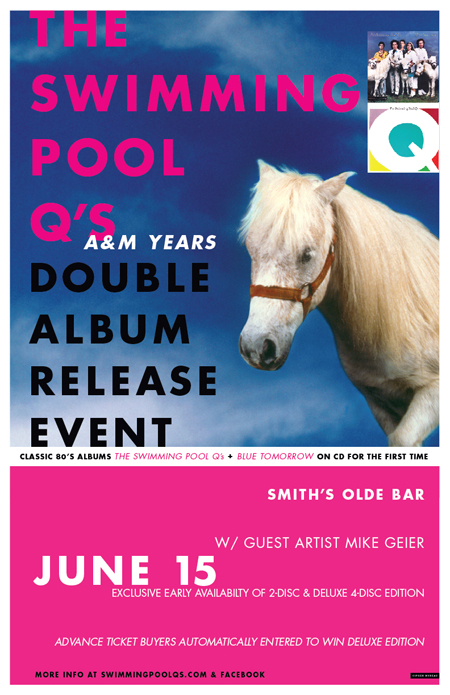 When iconic Atlanta rockers The Swimming Pool Q’s reconvene for a gig at Smith’s Olde Bar this Saturday night, they’ll not only be celebrating their 35th anniversary as a band but also the long-awaited release of their two major label A&M Records releases on CD for the first time. The albums, 1984’s The Swimming Pool Q’s and its more sonically sophisticated follow-up, 1986’s Blue Tomorrow, advanced the band’s musical mission to a national audience after dazzling locals with its 1981 DB Records debut, The Deep End. The two A&M releases slicked up the band’s sound and pushed singer Anne Richmond Boston further into the forefront as Q’s founder Jeff Calder flexed his writing skills, creating complex women for Boston to inhabit. Calder’s equally colorful Southern politicians and deranged religious crackpots also populated the new releases, often enhanced with expert melodic guitars helmed by Bob Elsey and J.E. Garnett’s slinky bass lines. The Q’s drummer Billy Burton, meanwhile, often multi-tasked behind the scenes, putting his filmmaking skills to work, shooting short films of the band set to music (some of these shorts were unearthed for Auto Zoom, a companion DVD included in the A&M reissues deluxe set).

After making inroads at college radio and touring with Lou Reed, A&M unceremoniously dumped the Q’s from its roster in 1986 without ever financing a music video for MTV, the hot new medium for breaking bands or releasing the two LPs on the burgeoning CD digital format. It would take 15 years for Calder to wrangle the rights to the albums back from Universal and fans themselves helped finance this month’s deluxe 2-CD set, The Swimming Pool Q’s The A&M Years, 1984-1986 via a Kickstarter campaign. Summarizes Boston: “These albums are finally coming out on CD just in time for the resurgence of vinyl. Timing was never our thing.”
The package officially comes out June 25 but copies will be available at the band’s Smith’s Olde Bar gig this weekend. Between rehearsals to blow the dust off several deeper cuts from the albums, the Q’s Calder and Boston sat down with Atlanta magazine for a poignant and funny chat.

Q: I ran into Stomp & Stammer magazine publisher Jeff Clark recently at a media event and both of us, having listened to advance copies of these albums almost 30 years later, are dumbfounded as to how gems like The Bells Ring and Pretty on the Inside weren’t monster radio hits. Listening to these albums again in 2013, do you have the same reaction?

A (Boston): How drunk were you? (laughs). I don’t know what radio you guys were listening to back then but it’s awfully nice of you to say. To be honest, I thought the same thing at the time. I definitely thought we had songs that were accessible to radio.

Q: In this new deluxe set, there’s a DVD video compilation from the era, Auto Zoom. Looking at it, I realized for the first time A&M never financed a video for MTV. Would that have made the difference?

A (Calder): I think it could have made a critical difference, especially on Blue Tomorrow with a song like Wreck Around. It was a song that was unique enough to capture people’s attention and lovely enough to be some visually engaging.

A (Boston): I remember being really disappointed when that didn’t happen, mainly because that’s how people were finding out about new bands at the time. They may have just decided at that point they didn’t want to sink any more money into the band.

Q: Anne, how challenging was it to be the only woman in a band touring around the country with a bunch of men?

A (Boston): Using the term loosely (laughs). No, I never thought about it as a challenge. I was almost one of the guys although I didn’t think of it in those terms. The thing that was odd was, at that time, when we toured, we didn’t run across a lot of other bands with women in them. It seemed like whether we were the opening act or the headliner, I was the only female there. Later on, things certainly changed. I was kind of like the Cub Scout leader, the den mother who made sure the waitress got tipped because they couldn’t figure it out, stuff like that.

Q: Jeff, as the band evolved, you started writing songs specifically for Anne to sing. How did that evolution happen?

A (Calder): When I started writing songs, I didn’t have much understanding of melody at all. To me, it was just as many words as possible, jamming them into some kind of weirdo, oddball music structure and that was songwriting to me. [Guitarist] Glenn Phillips had to ask me, “Jeff, have you ever considered writing a song with a vocal melody?” I’m serious. I didn’t know what he was talking about. I was never about the band being an exclusive vehicle for my songwriting. I wanted something more than that. When you play a song like Rat Bait live, it’s fun but there’s really no emotional quality to it. Gradually, our repertoire included these songs that were more melodic, more emotional and more romantic and that’s all thanks to Anne.

Q: Jeff, you’ve said that Pretty on the Inside from Blue Tomorrow was partially inspired by Anne’s apartment in Buckhead that was built in the 1920s. How so?

A (Boston): It was an apartment on Rumson Road. It’s still there, believe it or not.

A (Calder): Keep in mind, Anne is an artist. When I walked into her place in 1978, I had never see anything like it. Walls of toys and artwork and I’m like “What in the hell?!” I’m from a town in central Florida. I was used to people who lived in trailers that looked like something from The Rockford Files. Her place had personality. In order to write for Anne, you couldn’t just write a song for a female voice. You had to write it for Anne. That song needed a setting so I mentally moved it from an apartment to a house and did a little, um, redecorating with the lyrics.

A (Boston): It was a little efficiency apartment. It was just one room and it was filled with a lot of crap (laughs).

Q: Jeff, some fans consider Wreck Around from Blue Tomorrow the Q’s masterpiece. It’s a song chronicling the South and it’s ongoing struggle with change. It’s basically Faulkner in four-and-a-half minutes, isn’t it?

A (Boston): He’ll take that as a compliment, won’t you?

A (Calder): Maybe Faulkner should have stuck with that formula! (laughs). Back when we wrote that song, the intown world of Atlanta was one thing but when you got outside the perimeter, it was a really different story. It became a study in contrasts. We recorded Blue Tomorrow at Studio One just outside the perimeter. It was where Lynyrd Skynyrd and the Atlanta Rhythm Section recorded. It was in an industrial park. Believe it or not, six weeks ago, I picked up the reissue packages two doors down from that address in that same industrial park.

A: (Boston): The song was really about the decaying South and that subject matter still resonates.

Q: Jeff, on these two albums, you give voice to a lot of Southern religious fanatics and crazy racist politicos. Were those characters influenced by your upbringing?

A (Calder): I was always really attracted to those characters. They were like a magnet for me and the crazier, the better. As a kid, Southern politicians fascinated me. I grew up in Charleston so that was one really weird sensibility. But then, I moved to Central Florida. Anne actually lived there for a year as well. It was way crazier and weirder. When you’re trying to become a writer, it was perfect subject matter for me.

A (Boston): We used to say that Florida needed to be sawed off and be allowed to just float quietly away from the rest of the country.

Q: Anne, in 1986 after Blue Tomorrow was released and it went nowhere at commercial radio and A&M let the band go, you opted to leave the Q’s. Why?

A (Boston): That whole experience was pretty disappointing for me. Plus, I was going to get married, so that’s what I did. I was never quite sure how the whole myth of “Anne was gone from the Q’s for 16 years” got started. I remember singing with the Q’s when I was pregnant and I continued to do album artwork for the band. I always liked the band, there was just stuff about it I couldn’t take. I had a child and was focused on other things. The reason I came back was because I realized that it could finally be fun. There was no pretense or pressure to be this famous rock band. We’ve always loved playing music together. That’s what brought me back.

Q: Tell us about Saturday’s gig. What can we expect to hear?

A (Calder): We’re doing a lot. I rehearsed Now I’m Talking About Now [from Blue Tomorrow] today. We’re doing some challenging things like Silver Slippers [from The Swimming Pool Q’s] that I really love.

A (Boston): Finding those high notes again after 30 years is the challenge!

The Swimming Pool Q’s 35th Anniversary and The A&M Years Release Party with opening act Mike Geier of Kingsized, Smith’s Olde Bar, Saturday, June 15. Tickets are $15 in advance through Ticket Alternative or $20 at the door.