Home News & Opinion From the Magazine Rat-lanta: On the front lines of Atlanta’s rodent invasion

Jason Field spied the problem as soon as he pulled into the driveway. The vents to the crawlspace of the 1950s Avondale Estates bungalow were covered by old metal grates with holes as round as his thumb. Then he ambled closer. There, on the green ledge beneath the vent—dark rub marks. This is where the rats got in. He was sure of it.

The bungalow’s owner had called Field’s company, Zone Pest Solutions, after hearing scratching noises from the attic at night. Now, as Field entered the crawlspace, he found half-eaten acorns on the water heater. More evidence: Tic-Tac-shaped droppings in the attic and even under the kitchen sink.

Rats in metro Atlanta are as ubiquitous as kudzu, only they’ve been here longer. But if the conventional wisdom is true—for every rat you see, there are six others you’re not seeing—then we’re under siege. You can see them on power lines. Crossing streets. Darting out from dumpsters. Heck, they’ll even eat your garden tomatoes right off the vine. This fall, Orkin, the Atlanta-based extermination giant, ranked the metro area 14th in the country for rats, based on the number of calls it gets. A 2009 study conducted by academic rat experts (yes, that’s a thing) and commissioned by the rat poison manufacturer d-Con put the city of Atlanta second in the nation for “rat risk” based on foreclosure filings, unemployment data, extermination spending, infrastructure status, and climate conditions. In 2010, a d-Con follow-up survey found that 47 percent of Atlantans had spotted rodents in their homes. The rattiest neighborhoods: College Park, East Atlanta, and downtown.

Why the onslaught? No one knows for sure, but it’s probably a combination of the following:

For his part, Field, the exterminator, thinks our rat problem also has something to do with the way we handle rat problems. In years past, humans employed a scorched earth policy when it came to rats: Poison whole colonies; trap the rest. Now the focus is on safety and humaneness. Field’s first move on the Avondale Estates bungalow was to seal off the home, placing wire mesh over the crawlspace vents and plugging holes in the roofline to seal the animals inside. Then he set snap traps baited with birdseed and strawberry icing (Field’s unique touch) to lure the rats to their deaths. The problem is that while the pack of five to 10 rats (he’s seen as many as 40 in a single family home, hundreds in some commercial properties) in this bungalow is dealt with, the cousins who are locked out just move on to the next house.

That’s why rats thrive in dense urban areas; rodent overpopulation truly is a city issue. New York spends millions dealing with its epic rat problems. But in metro Atlanta, no agency “owns” rats, making it confusing to know whom to call. (The city of Atlanta once employed a “Rat Attack” team that was phased out in the early 1990s.)

If the complaint involves a restaurant, county health departments are alerted. But residential properties involve code compliance departments of city and county police forces. The city of Atlanta’s Office of Code Compliance deals with more than 20,000 complaints a year and has only 26 inspectors, according to Major James Shaw. Not all calls are rat-related; many have to do with building code issues (which can also signal conditions in which rodents thrive). When it comes to places overrun with rats, Code Compliance gives the property owner up to two weeks to hire an exterminator and get rid of the pests.

Meanwhile, the owner of the Avondale Estates bungalow was optimistic she had finally evicted her unwelcome tenants. In the weeks after Field first set his traps, they caught several rats—including one the size of a small Guinea pig. The traps are now turning up empty and the scratching noises have stopped. But even if this case is closed, no exterminator worthy of the name would guarantee that the rodents will never return. Rats are survivors that will squeeze and gnaw their way through anything to seek shelter from the cold, wet, and heat. And even though there is stigma attached to infestation, Field says it is rarely ever the homeowner’s fault. It’s just their turn. “In Atlanta, there are two kinds of people: Those who have rats, and those who will.”

Rat sheet
Atlanta is home to two types of rats: Norway rats (Rattus norvegicus) and roof rats (Rattus rattus). Norways are known for their larger size, burrowing talents, and lighter coloring. Roof rats can be black in color and are climbers, as their name suggests, often seen in trees, on power lines, and in attics. The Southeast is one of only two regions in the U.S. that is home to both Norway and roof rats. (The West Coast also appeals to both species.) 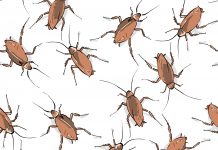 Atlanta belongs to the roaches now. We merely live here. 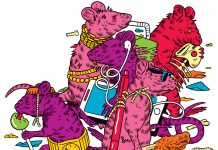